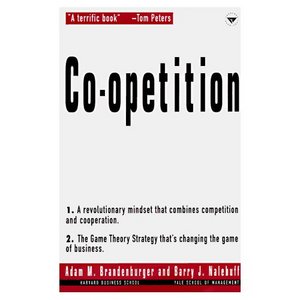 Co-opetition is a readable book with some plausible discussion of interesting cases.  The central message is that business is not always a zero-sum game (in contrast, say, to competitive sports).  One implication is that the firm’s complementary relationships with other firms, may deserve as much attention as its competitive relationships.

One qualitfication:  I think the book too much emphasizes game theory as the sine qua non source of the book’s insights.  About the only game theory you really need to understand 99% of the book’s analysis is the concept of the "zero-sum game."

In a couple of places, the book discusses "leapfrog" competiton in the video game industry:

(p. 114)  Could a challenger hope to breach Nintendo’s virtuous circle?  Not once the circle had got rolling.  Forget about alternatives–TV,  books, sports.  From a kid’s perspective, there were no good alternatives to a video game.  The only real threat came from alternative video game systems.  Here, software was key, as always.  With a huge library of Nintendo titles to choose from, why would anyone buy another machine?  Perhaps a challenger could take successful Nintendo games over to its platform and then offer its own library.  But the exclusivity clause killed that option.  No game could be taken to another platform for a two-year period, by which time the game was passe.  A challenger would have had to start from scratch.  While large profits and shortages normally invite entry, the virtuous circle made competing in Nintendo’s game hopeless.  The only hope was to leapfrog Nintendo with a new technology; that’s what Sega ultimately did, as we’ll see in the Scope chapter.