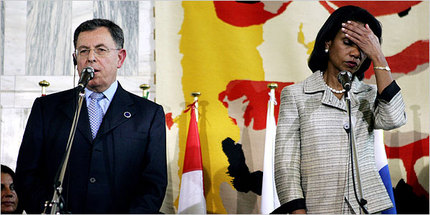 The photo of Condi Rice touching her forehead ran on the top of the front page of the New York Times on Thurs., July 27, 2006.  It ran big:  filling over a third of the length of the paper, and over half of the width.  It ran right next to the main headline of the front page:  "CEASE-FIRE TALKS STALL AS FIGHTING RAGES ON 2 FRONTS."

It appears that Condi Rice is discouraged, or has a headache, or is overcome.

But a great CNN report by Jeanne Moos run on Sat., July 29, shows a dynamic version of the minute during which this snapshot was taken.  It shows that this photo is a split-second moment of Condi Rice brushing hair off of her forehead.

Our usual view of competition is to look at how many competitors there are at a moment in time.  We look at a snapshot.  But to really judge competition we must take Schumpeter seriously and look dynamically at whether there is the possibility of leapfrog competition over time.