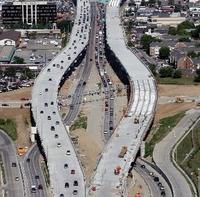 The long delays, and lack of visible progress in expanding 132nd, near our house, became a running joke—but the wasted travel time was not funny.  Similar road construction delays were occuring all over town, to the point where it looked as though the issue might threaten the mayor’s re-election.  So he got serious, and in new road contracts, included substantial monetary incentives for finishing the job ontime, and even more incentives to finish it early.  The expressway pictured above is one of those built under the new contract.  Maybe incentives really do matter?

(p. 1A)  An electronic sign above West Dodge lured drivers with a simple message:  "Expressway Open."

The real draw was the quicker commute drivers encountered Thursday evening during the first rush hour after the opening of the West Dodge Road Expressway.

After two years of construction, the expressway’s westbound bridge opened to traffic at 10:35 a.m. Thursday, more than a year ahead of schedule.

A steady flow of traffic streamed across the bridge Thursday evening.

(Note: The online version of the article had the title: "Making quick work of commute on Expressway.")