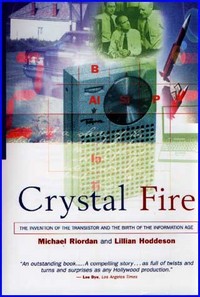 Crystal Fire is a well-written book which highlights many important aspects of the birth of computers.  Not a perfect book—I could have done with a few less details about personal information, like who liked to play bridge and poker, and whose mother was a frustrated artist, and the like.

On the good side, they note how transistors were originally designed to replace vacuum tubes.  The eventual main applications, as memory and processor chips in computers, only came later.  (Another application of Fubini’s Law.)

They have a nice discussion of how American science was applied, versus the pure theory of the Germans.  (E.g., to the Germans, some key phenomena leading to transistors, were dismissed as "dirt effects" (pp. 74 & 78).)  The whole episode is a good example of the claim (see Terence Kealey) that very good science can come out of ‘industrial’ labs.

They also have a good example of serendipity, in the discussion of the strange chunk of silicon with unusual conductivity properties (circa p. 95).  Reading this episode, it occurred to me that one key enabler of serendipitous discoveries is a scientist or engineer who is carrying around a problem, to which the serendipitous discovery is a solution.  Buddhists need not apply—to carry around problems, you need to be dissatisfied–a milder version of what Tom Peters describes as ‘innovation coming from pissed-off people’  (see his Re-Imagine!)

Citation to the book: