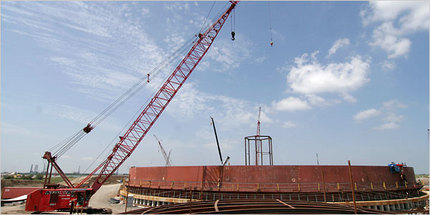 A Louisiana site where Cheniere is building a terminal for liquified natural gas.  Source of image:  online version of the NYT article cited below.

Charif Souki is making a risky business decision.  If he is wrong, he and his investors will lose much. If he is right, consumers will be better off, having a larger supply of liquified natural gas (LNG).  And if he is right, he should be allowed to make a lot of money, both because that is just, and because it is useful for those who have bet right in the past, to have ample means to bet right in the future.

(p. C1)  CAMERON PARISH, La. — The Sabine River channel, where alligators and speckled trout live alongside petrochemical plants and oil refineries, has suddenly become the center of a quiet revolution in the world of natural gas.

And it is mainly at the prodding of a little-known company called Cheniere Energy, with help from Exxon Mobil and Sempra Energy.  Together they have overcome formidable regulatory hurdles to build three new liquefied natural gas terminals on the channel that will double the nation’s capacity to import natural gas by 2011.

It has been 24 years since anyone on American shores has built a new liquefied natural gas terminal.  Two of the country’s four existing onshore terminals, which dock tankers the size of aircraft carriers ferrying supercooled gas from places like Qatar and Trinidad, were mothballed for years because production at home was plentiful and prices were low.

As recently as five years ago almost nobody in the energy world thought it possible to make money from a new American terminal project — with price tags that start at $600 million — let alone get a federal permit.

One lonely believer was Charif Souki, a Lebanese immigrant entrepreneur who had previously raised (p. C4) money for real estate in Paris and hotels in Hawaii before becoming chairman of Cheniere, a floundering gas exploration company.  Not even the 9/11 attacks, which made many people on the Atlantic and Pacific Coasts view liquefied natural gas terminals as potential terrorist targets, diverted him from his vision.

Now, even as natural gas prices sag, along with his company’s stock price, and the word glut is on the tip of the tongue among the drilling crowd, Mr. Souki says he is fixed on the longer view.

He is convinced the nation will need to import more gas because North American production is declining.  That is the same view Mr. Souki held six years ago, when he decided to shake up the company’s business plan.  He defiantly changed its stock symbol to LNG in 2003, and devoted himself to scoping out the country’s coastlines for potential terminal sites.

The already energy-intensive shoreline along the Gulf of Mexico, he concluded, made the most sense, economically and politically, and he started buying real estate in uninhabited harbors close to existing pipelines and gas-thirsty refineries and petrochemical plants.

“People were actually amused that we would be thinking about importing natural gas,” dryly giggled Mr. Souki, 53, a man with a taste for double-breasted suits.  “Nobody took us very seriously.”

Cheniere was so unprofitable and utterly spurned by investors in 2002 that Mr. Souki had to borrow $30,000 from his company’s president just to meet a payroll.  But over the last four years, Mr. Souki has managed to arrange financing, sign up long-term buyers and master the regulatory process. 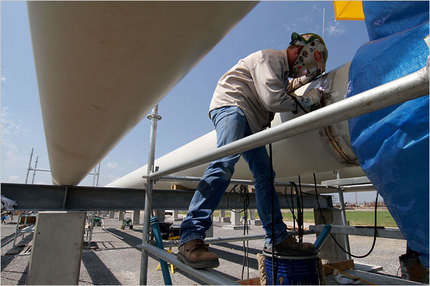 The map shows the area in which the terminal is being built.  The bottom photo shows a Louisiana site where Cheniere is building a terminal for liquified natural gas.  Source of image:  online version of the NYT article cited above.