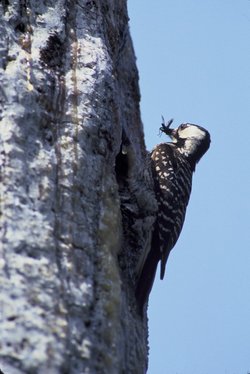 BOILING SPRING LAKES, N.C., Sept. 23 (AP) — Over the past six months, landowners here have been clear-cutting thousands of trees to keep them from becoming homes for the endangered red-cockaded woodpecker.

The chain saws started in February, when the federal Fish and Wildlife Service put Boiling Spring Lakes on notice that rapid development threatened to squeeze out the woodpecker.

The agency issued a map marking 15 active woodpecker “clusters,” and announced it was working on a new one that could potentially designate whole neighborhoods of this town in southeastern North Carolina as protected habitat, subject to more-stringent building restrictions.

Hoping to beat the mapmakers, landowners swarmed City Hall to apply for lot-clearing permits.  Treeless land, after all, would not need to be set aside for woodpeckers.  Since February, the city has issued 368 logging permits, a vast majority without accompanying building permits.

The results can be seen all over town.  Along the roadsides, scattered brown bark is all that is left of pine stands.  Mayor Joan Kinney has watched with dismay as waterfront lots across from her home on Big Lake have been stripped down to sandy wasteland.

Like the woodpeckers, humans are also looking to defend their nest eggs.

Bonner Stiller has been holding on to two wooded half-acre lakefront lots for 23 years.  He stripped both lots of longleaf pines before the government could issue its new map.

“They have finally developed a value,” said Mr. Stiller, a Republican member of the state General Assembly.  “And then to have that taken away from you?”