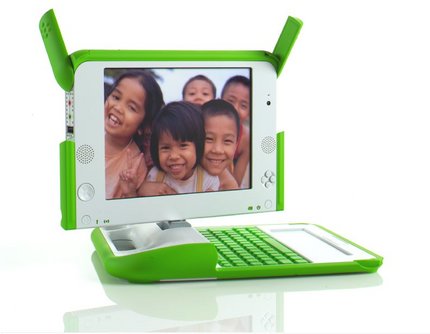 One version of the laptops produced by One Laptop Per Child for roughly $100 a piece.  Source of image:  http://www.laptop.org/OLPC_files/nigeria.jpg

Simply giving each child a laptop, won’t much improve their standard of living.  (See Easterly’s The Elusive Quest for Growth.)  But maybe a few of the children will obtain access to information about what is possible in the outside world, and maybe that will lead them to fight for more freedom?

But at least, if they remain poor, it will not be possible to lay the blame on some sort of ‘digital divide.’  Lay the blame, instead on government economic planning.

Note the aside buried in the article:  ‘competitive advantage’ economist Michael Porter is telling the Libyans how to develop a "national economic plan"??  (Say it ain’t so, Michael!)

SAN FRANCISCO, Oct. 10 — The government of Libya reached an agreement on Tuesday with One Laptop Per Child, a nonprofit United States group developing an inexpensive, educational laptop computer, with the goal of supplying machines to all 1.2 million Libyan schoolchildren by June 2008.

The project, which is intended to supply computers broadly to children in developing nations, was conceived in 2005 by a computer researcher at the Massachusetts Institute of Technology, Nicholas Negroponte.  His goal is to design a wireless-connected laptop that will cost about $100 after the machines go into mass production next year.

At the World Economic Forum in Davos, Switzerland, in January, Bill Gates, Microsoft’s chairman, suggested that the next generation of cellphones might be a better way to reach across the so-called digital divide.

Mr. Negroponte said Microsoft refused to sell its Windows software to the project at a price that would make it possible to include in his system.  As a result, his laptops will come with the freely available Linux operating system, which is becoming increasingly popular in the developing world.

The idea of a laptop for every schoolchild grew out of Mr. Negroponte’s experience in giving children Internet-connected laptops in rural Cambodia.  He said the first English word out of the mouths of the Cambodian students was “Google.”

Discussions between the One Laptop project and the Libyan government began as part of work being done by the Monitor Group, an international consulting firm co-founded by the economist Michael E. Porter.  It is now helping the Libyans develop a national economic plan.

The first test models will be distributed to the five participating countries companies at the end of this November, according to Mr. Negroponte, and mass production is planned for June or July of 2007.

The computers come with a wireless connection, a built-in video camera, an eight-hour battery and a hand crank for recharging batteries.  They will initially be priced below $150, and the price is expected to decline when they are manufactured in large numbers. 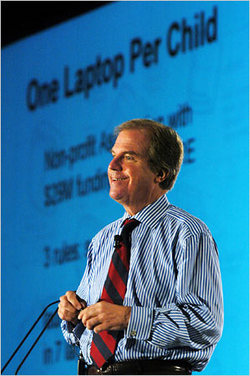