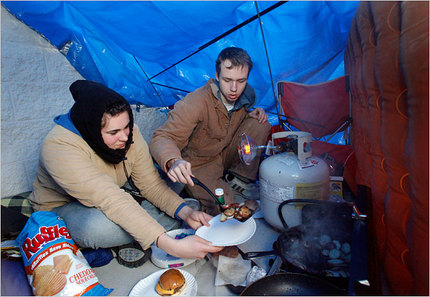 If Schiesel’s review is on-target, these shoppers, waiting to buy Playstation 3, may regret having camped-out at the store to be among the first to buy the new game platform.  Source of photo:  http://graphics8.nytimes.com/images/2006/11/17/business/15game1.650.jpg

(p. B1)  Howard Stringer, you have a problem.  Your company’s new video game system just isn’t that great.

Ever since Mr. Stringer took the helm last year at Sony, the struggling if still formidable electronics giant, the world has been hearing about how the coming PlayStation 3 would save the company, or at least revitalize it.  Even after Microsoft took the lead in the video-game wars a year ago with its innovative and powerful Xbox 360, Sony blithely insisted that the PS3 would leapfrog all competition to deliver an unsurpassed level of fun.

Put bluntly, Sony has failed to deliver on that promise.

Measured in megaflops, gigabytes and other technical benchmarks, the PlayStation 3 is certainly the world’s most powerful game console.  It falls far short, however, of providing the world’s most engaging overall entertainment experience.  There is a big difference, and Sony seems to have confused one for the other.

The PS3, which was introduced in North America on Friday with a hefty $599 price tag for the top version, certainly delivers gorgeous graphics.  But they are not discernibly prettier than the Xbox 360’s.  More important, the whole PlayStation 3 system is surprisingly clunky to use and simply does not provide many basic functions that users have come to expect, especially online.

(Note:  the bold has been added to "leapfrog.")