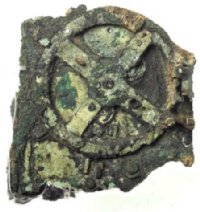 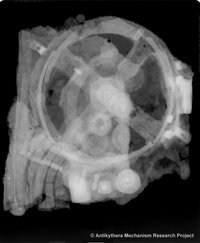 On the left is a photo of Fragment A, the largest of the 82 fragments of the Antikythera Mechanism.  On the right is an x-ray (radiograph) of Fragment A.  Source of images:  http://www.xtekxray.com/antikythera.htm

When I was a young graduate student at Chicago, in the mid-1970s, T.W. Schultz was a gentle, but still active and sharp, old man.  I respected him and liked him, but sometimes thought he was a bit naive.  For instance, one of his positions was that most useful technology is already out there somewhere—the hard part is figuring out how to efficiently get the useful technologies to market at a price people are willing to pay.  (I’m writing this from memory.)  In other words, to use Schumpeter’s distinction between invention and innovation:  Schultz downplayed the role of invention and emphasized the role of innovation.

The amazing device discussed in the article below, seems like solid grist for T.W.’s mill.

(More grist would be a huge, fancy, ancient Chinese clock that is discussed in Daniel Boorstin’s The Discoverers book.)

Also, do not neglect to pause for a moment to notice the vindication of Derek J. de Solla Price.  Few today know his name, but he should be remembered as one of the first (Galton might be the first) to apply bibliometric measures to the study of science.

A computer in antiquity would seem to be an anachronism, like Athena ordering takeout on her cellphone.

But a century ago, pieces of a strange mechanism with bronze gears and dials were recovered from an ancient shipwreck off the coast of Greece.  Historians of science concluded that this was an instrument that calculated and illustrated astronomical information, particularly phases of the Moon and planetary motions, in the second century B.C.

Technology historians say the instrument is technically more complex than any known for at least a millennium afterward.  Earlier examinations of the instrument, mainly in the 1970s by Derek J. de Solla Price, a Yale historian who died in 1983, led to similar findings, but they were generally disputed or ignored.

The hand-operated mechanism, presumably used in preparing calendars for planting and harvesting and fixing religious festivals, had at least 30, possibly 37, hand-cut bronze gear-wheels, the researchers said.  . . .

Dr. Charette noted that more than 1,000 years elapsed before instruments of such complexity are known to have re-emerged. A few artifacts and some Arabic texts suggest that simpler geared calendrical devices had existed, particularly in Baghdad around A.D. 900.

It seems clear, he said, that ”much of the mind-boggling technological sophistication available in some parts of the Hellenistic and Greco-Roman world was simply not transmitted further.”

”The gear-wheel, in this case,” he added, ”had to be reinvented.”

The reference for the Nature article reporting the new analysis, is:

The reference to the Boorstin book, is:

On the Chinese clock, the Boorstin book relies on:

One of Derek J. de Solo Price’s most important books, is: 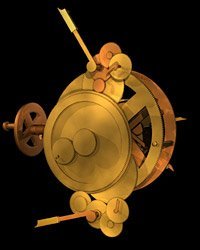 A computer model re-construction of the Antikythera Mechanism.  Source of image:  http://www.xtekxray.com/antikythera.htm