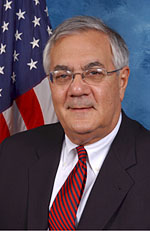 Policy-makers are often enthused by the innovation unleashed by Schumpeter’s process of creative destruction, but draw back out of fear of the destruction of jobs.  In the passage below, Barney Frank expresses that fear.

I think that there are answers to the fear.  More and better jobs are created, than destroyed; workers can invest in general skills that do not depreciate, and retool the specific skills that do depreciate; and conscientious workers suffer from lack of recognition and upward mobility, when creative destruction is stiffled.  The pain is less than usually thought, and the gain is greater.

One of the consequences of this separation between economic growth and the well-being of the great majority of citizens is that an increasing number of citizens don’t care about economic growth.  Not surprising.  Not only do they not benefit, but in many cases they get the short-term disruptive effects.

I mean, there was a great concept from Joseph Schumpeter of creative destruction in which, as the old economic order is destroyed, resources are freed up for the new order.

Well, increasingly, we have people who see the destruction in their own lives, but don’t see that they’re going to be part of the new creation.

Transcript of remarks delivered at the National Press Club on "Wages" by Democratic Representative Barney Frank of Massachusetts, on January 3, 2007.