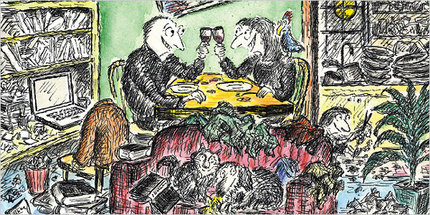 Cartoon clutter by Edward Koren.  Source of cartoon:  online version of the NYT article cited below.

(p. D1)  But contrarian voices can be heard in the wilderness. An anti-anticlutter movement is afoot, one that says yes to mess and urges you to embrace your disorder. Studies are piling up that show that messy desks are the vivid signatures of people with creative, limber minds (who reap higher salaries than those with neat ”office landscapes”) and that messy closet owners are probably better parents and nicer and cooler than their tidier counterparts. It’s a movement that confirms what you have known, deep down, all along: really neat people are not avatars of the good life; they are humorless and inflexible prigs, and have way too much time on their hands.

(p. D6)  Mr. Freedman is co-author, with Eric Abrahamson, of ”A Perfect Mess: The Hidden Benefits of Disorder,” out in two weeks from Little, Brown & Company. The book is a meandering, engaging tour of beneficial mess and the systems and individuals reaping those benefits, . . .

The reference to the new book: 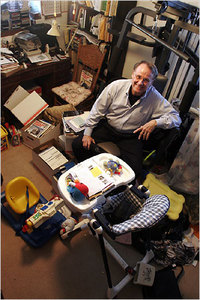 Don Springer won his company’s contest for having the worst clutter.  Source of photo:   online version of the NYT article cited above.

One thought on “The Case for Clutter”