(p. 9)  BACK in the 1970s Albert S. Ruddy, the producer of ”The Godfather,” first approached Ayn Rand to make a movie of her novel ”Atlas Shrugged.” But Rand, who had fled the Soviet Union and gone on to inspire capitalists and egoists everywhere, worried aloud, apparently in all seriousness, that the Soviets might try to take over Paramount to block the project.

”I told her, ‘The Russians aren’t that desperate to wreck your book,’ ” Mr. Ruddy recalled in a recent interview.

Rand’s paranoia, as Mr. Ruddy remembers it, seems laughable. But perhaps it was merely misplaced. For so many people have tried and failed to turn the book she considered her masterpiece into a movie that it could easily strike a suspicious person as evidence of a nefarious collectivist conspiracy. Or at least of Hollywood’s mediocrity.

Of course Rand herself had a hand in blocking some of those attempts before she died in 1982. Her heirs in the Objectivist school of thought helped sink some others. And plans for at least a couple of television mini-series fell to the vicissitudes of network politics and media mergers.

But Rand’s grand polemical novel keeps selling, and her admirers in Hollywood keep trying, and the latest effort involves a lineup of heavy hitters, starting with Angelina Jolie. Randall Wallace, who wrote ”Braveheart” and ”We Were Soldiers,” is working on compressing the nearly 1,200-page book into a conventional two-hour screenplay. Howard and Karen Baldwin, the husband-and-wife producers of ”Ray,” are overseeing the project, and Lions Gate Entertainment is footing the bill.

Whether Ms. Jolie, who has called herself something of a Rand fan, will bring the novel’s heroine, Dagny Taggart, to life on screen, or merely wind up on a list with other actresses who sought or were sought for the role — including Barbara Stanwyck, Faye Dunaway, Raquel Welch, Farrah Fawcett and Sharon Stone — remains to be seen. Until now, at least, no one in Hollywood has figured out a formula that promises both to sell popcorn and to do justice to the original text, let alone to the philosophy that it hammers home endlessly, at times in lengthy speeches. (The final one is 60 pages long.)

But Mr. Baldwin said he believed that Mr. Wallace and the rest of their team were up to the task. ”We all believe in the book, and will be true to the book,” he said. 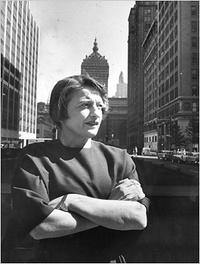