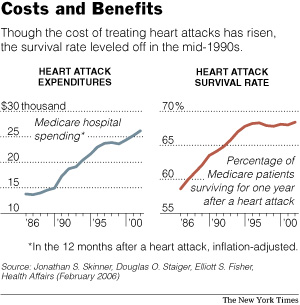 EXPERTS have long been puzzled by the existence of large regional disparities in medical care in the United States. Even for diseases for which the appropriate treatment is widely accepted, doctors across the country take vastly different approaches, often leading to enormous expense without making any appreciable improvement in their patients’ health.

“What makes the lag in beta-blocker adoption puzzling is that the clinical benefits have been understood for years,” wrote Jonathan S. Skinner and Douglas O. Staiger, economists at Dartmouth, in a recent study about these regional patterns.

Congress has decided that some treatment decisions may be best taken out of doctors’ hands. In one of their last acts this year before adjourning, lawmakers passed a bill entitling doctors to a bonus from Medicare if they report data on the quality of their care, using criteria like whether they prescribe aspirin or beta blockers to heart attack victims. In the future, this data would permit Medicare to reward doctors who followed government guidelines.

. . . , much spending on health care provides enormous benefits. A study published this year by Mr. Skinner, Mr. Staiger and Dr. Elliott S. Fisher of Dartmouth Medical School found that Medicare spending on hospital care for heart attack victims surged two-thirds from 1986 to 1996, after accounting for inflation. But the percentage of victims who were alive a year after their attacks also increased, though by just 10 percentage points, to roughly 68 percent.

The relationship — rising costs bringing increased benefits — has broken down recently. From 1996 to 2002, Medicare spending on treatments for heart attack victims increased about 14 percent, after inflation. But there was virtually no improvement in survival rates.

There is mounting evidence that the zeal to treat and spend may actually hurt patients. The study by Mr. Skinner, Mr. Staiger and Dr. Fisher found that hospitals in regions where spending grew fastest from 1986 to 2002 had some of the worst practices, in terms of providing tried-and-true therapies, and recorded the smallest gains in survival rates.

Treatment of heart disease underscores the deeply idiosyncratic nature of many choices made by America’s doctors and hospitals. Coupled with a fee-for-service system that encourages aggressive treatment, these choices stimulate health spending that provides little benefit to patients. “A lot of the innovation and spending growth are going into gray areas that are not helping people that much,” Mr. Skinner said.