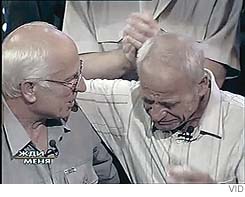 "Sergei and Pyotr Leontiev are reunited on the Russian TV show, ‘Zhdi Menya.’"  Source of the caption and photo:  online version of the WSJ article cited below.

They are stars on "Zhdi Menya," or "Wait for Me," one of the most popular TV shows in Russia. With its mission to reunite loved ones, the program probes Russia’s 20th-century history and the scars it left on the lives of ordinary people. It has become a must-watch for Russians still trying to make sense of their tortured past.

The brothers in this episode, Sergei and Pyotr Leontiev, were separated in 1941 when their mother was sent to a prison camp 1,800 miles east of Moscow. She took with her Sergei, then 2 months old, but left behind seven other children whom she never saw again. Meanwhile, Pyotr and his sisters left home, taking jobs at factories in nearby towns.

Since its launch in 1998, "Zhdi Menya" has brought together 30,000 people sundered by Stalin’s purges, war and the collapse of the Soviet Union. That’s earned it a unique, and cherished, place in popular culture.

"We reconstruct the real history of this country," says Igor Kvasha, the program’s host. "Not the garbled version in the text books."

Yet the program is ostensibly unpolitical. A tear-jerking cross between Jerry Springer and the History Channel, it recounts the crimes of communism without apportioning blame. That makes it palatable to Russia’s leaders, for whom Soviet-era might is still a political touchstone.

(p. A12)   This focus on the victims of the communist regime contrasts with most mainstream media, which these days tend to humanize Soviet-era leaders and gloss over their crimes. A TV drama, "Stalin.Live," has been panned by critics for portraying Stalin as a sympathetic old man.

"There’s a lot of pseudo-historical stuff on TV these days," says Irina Petrovskaya, a television critic. "’Zhdi Menya’ is different because it’s totally authentic. That’s why it’s so popular."

Pyotr Leontiev wrote to the program in 2001 in search of his brother. He had spent years trying to trace him through official channels, but was rebuffed at every turn.

The Leontiev family had been devastated by war and terror. Their father, drafted in 1941, was declared missing in action in 1943. Their mother was arrested on charges of "speculation" — neighbors informed on her for selling a few pounds of tobacco and she was packed off to the Gulag with Sergei, her youngest son, still a babe in arms. His siblings had only his cradle to remember him by.

Researchers at "Zhdi Menya" contacted police in Karaganda, Kazakhstan — the site of the mother’s prison camp — and after trawling archives they found a Sergei Leontiev whose records matched Pyotr’s description. Within weeks they had tracked down Sergei, a retired carpenter. After a childhood in orphanages in Karaganda, he’d spent most of his life, impoverished, in workers’ barracks.

In the studio, Pyotr told his story: "The tragedy that befell our family wasn’t unique." He described how his mother was wrenched from her children, how their last sight of her and baby Sergei was on a prison train bound for the steppes. "We never heard from them again." The children, raised by a 19-year-old sister, were lucky: Children of "enemies of the people" were often separated, their names changed, and sent to orphanages thousands of miles apart.

To the strains of Mozart’s Requiem, Mr. Kvasha spoke to the audience: "It’s hard to imagine how many stories there are like this. They didn’t just take away people’s husbands, wives and parents. They deliberately destroyed archives, concealed people’s names. They took away their memory."

In a heart-rending moment, he led Pyotr Leontiev to his brother, who was sitting weeping in the audience. The two embraced.

Pyotr had mixed feelings about the encounter. The joy of seeing Sergei was clouded by the revelation that his mother had been worked to death in 1943. "It was very hard, a very sad day," says Pyotr.

The two men broke down and looked deeply into each other’s eyes. "We survived," Pyotr said to his brother. "We survived."

The actor who hosts "Zhdi Menya" ("Wait for Me").  Source of image:  online version of the WSJ article cited above.