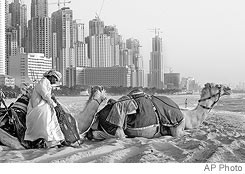 Dubai skyline.  Source of photo:  online version of the WSJ commentary quoted and cited below.

(p. A9) Dubai, which is part of the United Arab Emirates, represents turbo-charged free-market capitalism at its purest — sometimes crass, often over-the-top, and always in motion. Home to more than 1.2 million people, more than 80% of whom are resident aliens, Dubai is as much a multicultural melting pot as New York City was in its late 19th century heyday. And like New York then, Dubai teems with winners and losers, the rich and not-so-rich, and immigrants who often find that life in the glittering metropolis is cold, hard and unfair. But the government maintains order, spends billions on infrastructure and is dedicated to establishing the city-state as a global capital of, well, capital.

Seeing Dubai as an economic model for other parts of the Arab world is admittedly a challenge: Like Singapore, it has the virtues of a small ruling class, a tiny population and not much territory, and that is not something Egypt or Syria could emulate. But as a cultural model, or an attitude, it does offer an alternate vision of the future, one with its own excesses and vices for sure, but still free of the divisiveness and religious conflict that has become the assumed status quo in other parts of the Middle East.

Dubai should not be written off as little more than an Arab Las Vegas. It deeply challenges the assumption that Muslims, Christians and Jews cannot find common ground and work together to construct a shared future. Dubai is proof, not perfect, but real, that they can.