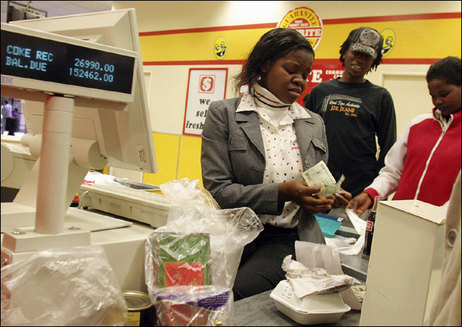 "Inflation made food cost a fortune in Harare this week.  The government imposed controls that required vendors to sell some items below cost."  Source of caption and photo:  online version of the NYT article cited below.

JOHANNESBURG, July 3 — Zimbabwe’s week-old campaign to quell its rampant inflation by forcing merchants to lower prices is edging the nation close to chaos, some economists and merchants say.

As the police and a pro-government youth militia swept into shops and factories, threatening arrest and worse unless prices were rolled back, staple foods vanished from store shelves and some merchants reported huge losses. News reports said that some shopkeepers who had refused to lower prices had been beaten by the youth militia, known as the Green Bombers for the color of their fatigues.

In interviews, merchants said that crowds of people were following the police and militia from shop to shop to buy goods at the government-ordered prices.

“People are losing millions and millions and millions of dollars,” said one merchant in Bulawayo, referring to the Zimbabwean currency, which is becoming worthless given the nation’s inflation, the world’s highest. “Everyone is now running out of stock, and not being able to replace it.”

Gasoline was reported to be vanishing from stations as the going price, about 180,000 dollars per liter, was slashed by the government to something closer to the officially approved price of 450 dollars per liter. Mr. Mugabe’s government intends to cope with the shortages by subsidizing producers of basic goods. One of the few newspapers not under government control, The Zimbabwe Independent, reported last week that flour, which is controlled entirely by the state, will be sold to bakers for 10 million dollars a ton, half the market price. Similarly, many suppliers of basic goods have been told by the government that they will be allowed to buy gasoline at one tenth the going price, the newspaper reported. The government apparently plans to make up those losses by printing more money. Zimbabwe’s dollar has lost more than half its value in recent weeks because the government has constantly issued new bills to pay its mounting debts.

CNN on 7/10/07 broadcast a great clip from ITN, that had been courageously recorded undercover by Martin Geissler.  See  "Desperation in Zimbabwe":

Postscript:  According to an entry on the ITV web site entitled "Mugabe Battles Economic Crises," Mugabe "has warned he will not be restrained by "bookish economics"."  (He makes a great case for cracking open the books, doesn’t he?  Or at least for opening the window and looking at what is happening outside?)

For the Mugabe quote on bookish economics, see:

One thought on “Mugabe Prints More Money and Beats Up Shopkeepers, as Inflation Soars: More on Why Africa is Poor”