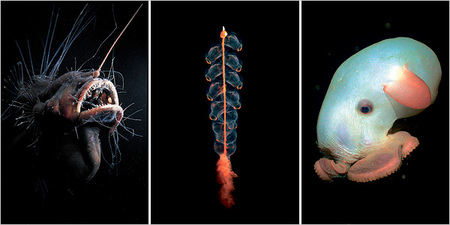 When, more than 70 years ago, William Beebe became the first scientist to descend into the abyss, he described a world of twinkling lights, silvery eels, throbbing jellyfish, living strings as “lovely as the finest lace” and lanky monsters with needlelike teeth.

“It was stranger than any imagination could have conceived,” he wrote in “Half Mile Down” (Harcourt Brace, 1934). “I would focus on some one creature and just as its outlines began to be distinct on my retina, some brilliant, animated comet or constellation would rush across the small arc of my submarine heaven and every sense would be distracted, and my eyes would involuntarily shift to this new wonder.”

Beebe sketched some of the creatures, because no camera of the day was able to withstand the rigors of the deep and record the nuances of this cornucopia of astonishments.

Colleagues reacted coolly. Some accused Beebe of exaggeration. One reviewer suggested that his heavy breathing had fogged the window of the submarine vessel, distorting the undersea views.

Today, the revolution in lights, cameras, electronics and digital photography is revealing a world that is even stranger than the one that Beebe struggled to describe.

The images arrayed here come from “The Deep: The Extraordinary Creatures of the Abyss” (University of Chicago Press, 2007), by Claire Nouvian, a French journalist and film director.

Beebe, who ran the tropical research department at the New York Zoological Society, surely had intimations of what lay beyond the oceanic door he had opened. “The Deep” brings much of that dark landscape to light, even while noting that a vast majority of the planet’s largest habitat remains unexamined, awaiting a new generation of explorers. 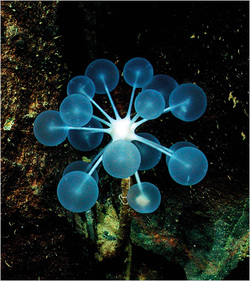 "A Ping-Pong tree sponge."  Source of caption and photo:  online version of the NYT article cited above.