In front is engineer Kazumitsu Nakamura, retired from Japan’s Hitachi, and now working for a Hitachi subsidiary in Taiwan.  Source of photo:  online version of the NYT article cited below.

(p. C1)  HSINCHU, Taiwan — One of the hottest exports from Japan these days isn’t video games or eco-friendly cars.

. . . , the recent export of job seek-(p. C5)ers is a sign of just how much Japan has changed during a decade of increased competition, corporate belt-tightening and the end of lifetime job guarantees. This harsher new world has forced Japan’s famously conservative salarymen to become more aggressive in their job choices, and to view their careers as something for their own benefit and not simply their companies’, employment experts say.

This shift in mindset also underscores how Japan’s long-closed economy is finally integrating with that of its neighbors. China has already replaced the United States as Japan’s biggest trading partner, and many Japanese now see their nation’s and their own personal future as linked to Asia’s red-hot economies.

“Salarymen are taking bigger risks,” said Mitsuhide Shiraki, a professor of economics at Waseda University in Tokyo. “They’re making a logical decision to work in Asia, where they are being better rewarded than in Japan.”   . . .

There has also been a growing number of retired engineers wanting to go to less-developed economies where their skills are still highly valued, allowing them to pursue second careers late in life.

“In Asia, we can keep contributing to society,” said Kazumitsu Nakamura, 64, a former engineer for Hitachi who quit to go to Taiwan, and was recently hired by a Hitachi subsidiary to train Taiwanese employees. “In Japan, we would just be collecting pensions.”

. . .   For Tatsuo Okamoto, a 51-year-old semiconductor engineer, the biggest change was the speed in decision-making at the Taiwanese company, Winbond Electronics, which hired him away from the Tokyo-based chip maker Renesas Technology two years ago.

Dr. Okamoto recalled one instance when a 15-minute chat in the hallway with Winbond’s president was enough to win immediate approval to purchase millions of dollars worth of factory equipment. The same decision in Japan would have taken days of committee meetings, he said.

Dr. Okamoto said the experience opened his eyes to the problems that were hobbling the competitiveness of Japan’s electronics industry.

“Joining a Taiwanese company was a high-risk, high-return decision,” Mr. Okamoto said. “But staying in Japan had become a high-risk, low-return proposition.” 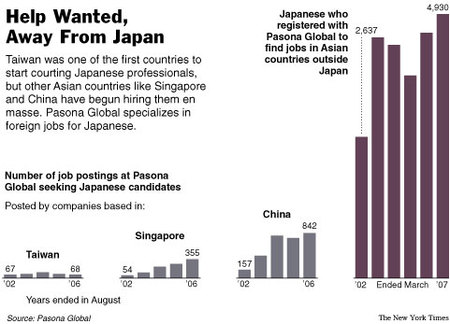 Source of graph:  online version of the NYT article cited above.