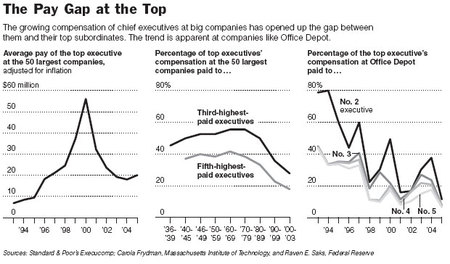 Source of graph:  online version of the NYT article quoted and cited below.

(p. A1)  Like most companies, Office Depot has long made sure that its chief executive was the highest-paid employee. Ten years ago, the $2.2 million pay package of its chief was more than double that of his No. 2. The fifth-ranked executive received less than one-third.

But the incentive for reaching the very top of the company is now far greater. Steve Odland, who runs Office Depot today, made almost $12 million last year, more than four times the compensation of the second-highest-paid executive and over six times that of the fifth-ranking executive in the current hierarchy.

As executive pay has surged in most American companies, attention has focused on the growing gap between the earnings of top executives and the average wage of workers in cubicles or on the shop floor. Little noticed, though, is how much the gap has also widened between the summit and the next few echelons down.

The pay of chief executives, analysts say, is being driven by superstar dynamics similar to those that determine the inordinate rewards for pop stars and athletes — a phenomenon first explained by Sherwin Rosen of the University of Chicago in (p. C7) 1981 and underlined more than a decade ago by the economists Robert H. Frank and Philip J. Cook in their book “The Winner-Take-All Society” (Free Press, 1995).

As American companies, American hedge funds — and even American lawsuits — have grown in size, it has become ever more valuable to get the “best” chief executive or fund manager or litigator. This has fueled a fierce competition for talent at the top, which has pushed economic rewards farther up the ladder of success, concentrating the richest pay levels even more.

“There is an interaction between technology and scale which is true in all these businesses,” said Steven N. Kaplan, a finance professor at the Graduate School of Business of the University of Chicago. “One person can oversee more assets, and this translates into more money.”

As companies grow and expand globally, the value of the top executive can grow exponentially. In a study last year, two economists, Xavier Gabaix of the Massachusetts Institute of Technology and Augustin Landier of New York University, argued that the fast rise in pay of corporate C.E.O.’s mostly reflected the growing size of American corporations.

Processing reams of data, the economists estimated that hiring the most effective chief executive in the country would, statistically, increase the stock value of a company by only 0.016 percent, compared with hiring the 250th chief executive. But at a company like General Electric, which is worth about $380 billion, that tiny difference would amount to $60 million.

This, the economists argued, helps explain why that top chief executive earned five times as much as the 250th. “Substantial firm size leads to the economics of superstars, translating small differences in ability to very large deviations in pay,” the economists wrote.