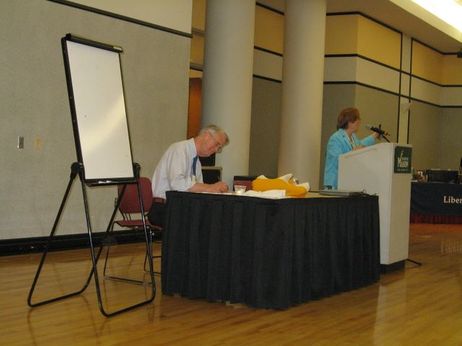 David Warsh prepares to speak as Sandra Peart introduces him at the HES meetings at George Mason.  Source of photo:  me.

David Warsh in his plenary address to the History of Economics Society on June 9, 2007, recounted a version of the account that he gives in his 2006 book Knowledge and the Wealth of Nations. (A key part of this story was also told in an article in the Sunday magazine section of The New York Times.)

Here I concentrate on the plenary lecture presentation.

Warsh said that he is the first to give Romer his due; that Romer has managed to alienate the economists both at Chicago and at MIT. (Well, maybe, but Tom Friedman sure gives Romer a lot of attention and praise in his best-selling The World is Flat.) Warsh also said that he (Warsh) has been accused of writing a hagiography of Romer.

Further, Warsh claims that the economics profession only achieved this insight when Romer found a way to incorporate knowledge in his formal models.

This story, Warsh says, is a triumph of formalism; only through formalism could such an important advance have been made.

At this point in the presentation, I became rather annoyed—I had my hand up during most of the question session, but Warsh chose not to call on me.  (In fairness, I was seated on his far left, though at the front, so it is possible that he did not see me.)

Long before Romer, others had pointed out the nonrivalry and nonexcludibility of knowledge. E.g., Arrow briefly in a famous essay (1962), and Harry Johnson at greater length in an obscure essay (1972).

The requirement that serious knowledge requires formalization before it is taken seriously, meant that economists ignored for several decades, what had been nonformally known. It is to the shame of formalism that for decades useful issues were ignored.

And even more strongly, to say that Romer is responsible for founding the economics of knowledge is to add insult to injury to the economists who had actually founded this field: economists such as Richard Nelson, Nathan Rosenberg, Zvi Griliches and Edwin Mansfield.

Not only was their work largely ignored for decades, but a leading advocate and exemplar of the formalist methodology responsible for the ignorance, is himself given credit for their achievements.

The reference to Warsh’s book, is:

For further information on the founders of the economics of science and technology, one could consult:

"Economics of Science." In Steven  N. Durlauf and Lawrence E. Blume, The New Palgrave Dictionary of Economics, 2nd ed., forthcoming, 2008, Basingstoke and New York:  Palgrave Macmillan, reproduced with permission of Palgrave Macmillan. This article is taken from the author’s original manuscript and has not been reviewed or edited. The definitive published version of this extract may be found in the complete New Palgrave Dictionary of Economics in print and online, forthcoming, 2008.

The full reference on the Arrow article, is:

The full reference on the Harry Johnson article, is: