Source of graphs:  online version of the NYT article cited below.

(p. A1)  A riddle: Why has the Toyota Prius enjoyed such success, with sales of more than 400,000 in the United States, when most other hybrid models struggle to find buyers?

One answer may be that buyers of the Prius want everyone to know they are driving a hybrid.

The Prius, after all, was built from the ground up as a hybrid, and is sold only as a hybrid. By contrast, the main way to tell that a Honda Civic, Ford Escape or Saturn Vue is a hybrid version is a small badge on the trunk or side panel.

The Prius has become, in a sense, the four-wheel equivalent of those popular rubber “issue bracelets” in yellow and other colors — it shows the world that its owner cares.

In fact, more than half of the Prius buyers surveyed this spring by CNW Marketing Research of Bandon, Ore., said the main reason they purchased their car was that “it makes a statement about me.”

Only a third of Prius owners cited that reason just three years ago, according to CNW, which tracks consumer buying trends.

“I really want people to know that I care about the environment,” said Joy Feasley of Philadelphia, owner of a green 2006 Prius. “I like that people stop and ask me how I like my car.” 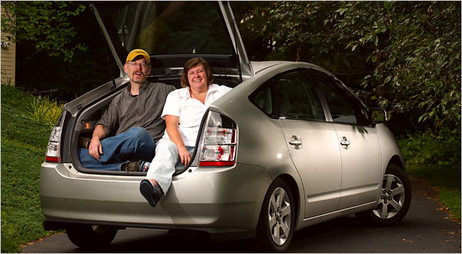 Peter Darnell describes himself as a "granola-crunching liberal."  He and his wife Karen (right) own a Prius.  Source of quote and photo:  online version of the NYT article cited above.