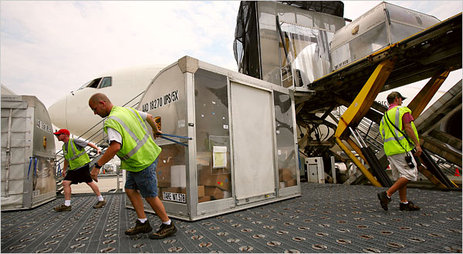 (p. C1)  LOUISVILLE, Ky. — Worldport, the United Parcel Service hub at the airport here, gives new meaning to the phrase “hub of activity.” On a peak night, workers have less than four hours to process more than a million packages from at least 100 planes and probably 160 trucks.

Yes, the ubiquitous brown trucks, with their brown-clad drivers, are the face that U.P.S. presents to the world. But increasingly, it is the researchers at its Atlanta headquarters, its technology center in Mahwah, N.J., and its huge four-million-square-foot Louisville hub who are asking the questions that will drive the company’s future.

What if the package contains medicine that could turn from palliative to poison if the temperature wavers? What if it is moving from Bangkok to Bangor and back to Bangkok, and if customs rules differ on each end? And what if the package is going to a big company that insists on receiving all its packages, no matter who ships them, at the same time each day?

Increasingly, it is the search for high-tech answers to such questions that is occupying the entire package delivery industry. U.P.S. and FedEx are each pumping more than $1 billion a year into research, while also looking for new ways to cut costs. “When you handle millions of packages, a minute’s delay can cost a fortune,” said John Kartsonas, an analyst with Citigroup. “Information technology has become essential.”

Customers of both FedEx and U.P.S. can now print out shipping labels that are easily scannable by computers. Meteorologists at both companies routinely outguess official Weather Service forecasts. And both are working with the Federal Aviation Administration to improve air safety and scheduling.

U.P.S. specifically is collaborating with the F.A.A. on a system — formally, Automatic Dependent Surveillance Broadcast, but usually just called A.D.S.B. — that may (p. C4) make conventional radar obsolete. “We want to make A.D.S.B. the backbone of our future air traffic system,” said Vincent Capezzuto, the manager of the program for the F.A.A.

The research at U.P.S. is paying off. Last year, it cut 28 million miles from truck routes — saving roughly three million gallons of fuel — in good part by mapping routes that minimize left turns. This year, U.P.S. began offering customers a self-service system for redirecting packages that are en route.

And now the U.P.S. researchers are working on sensors that can track temperatures of packages, on software that can make customs checks more uniform worldwide and on scheduling processes that accommodate the needs of recipients as well as shippers. “Recipients do not pay U.P.S., but they sure influence which carriers their suppliers use,” David A. Barnes, the chief information officer, said. 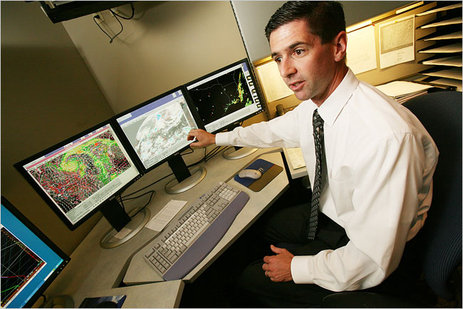 U.P.S. employee Jeffrey Sarver tracks the weather.  Source of photo:  online version of the NYT article quoted and cited above.