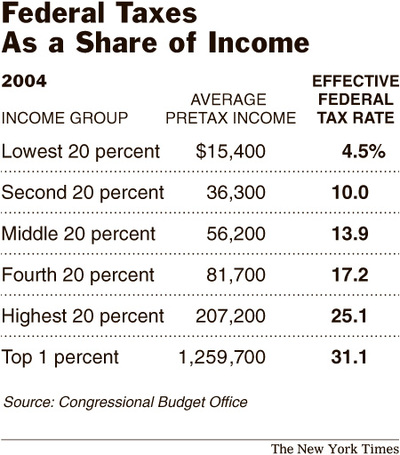 Source of table:  online version of the NYT commentary quoted and cited below.

(p. 4)  DO the rich pay their fair share in taxes? This is likely to become a defining question during the presidential campaign.

Fairness is not an economic concept. If you want to talk fairness, you have to leave the department of economics and head over to philosophy.

In his 1974 book, “Anarchy, State, and Utopia,” Professor Nozick wrote: “We are not in the position of children who have been given portions of pie by someone who now makes last-minute adjustments to rectify careless cutting. There is no central distribution, no person or group entitled to control all the resources, jointly deciding how they are to be doled out. What each person gets, he gets from others who give to him in exchange for something, or as a gift. In a free society, diverse persons control different resources, and new holdings arise out of the voluntary exchanges and actions of persons.”

To libertarians like Professor Nozick, requiring the rich to pay more just because they are rich is little more than officially sanctioned theft.

There is no easy way to bridge this philosophical divide, but the political process will, inevitably, try to forge a practical compromise among those with wildly divergent views. At the 2000 Republican National Convention, the candidate George W. Bush made clear where he stood: “On principle, no one in America should have to pay more than a third of their income to the federal government.” As judged by the C.B.O. data, he has accomplished his goal.

A question for any political candidate today is whether he or she agrees with the Bush tax ceiling. If not, how high above a third is he or she willing to go?