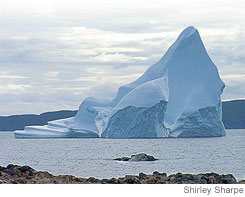 "An iceberg as seen off the coast of Twillingate in Newfoundland."  Source of caption and photo:  online version of the WSJ article quoted and cited below.

(p. B1)  Up and down the rock-ribbed coast of Newfoundland in centuries-old fishing villages like this one, Americans and Europeans are taking advantage of a warming climate and a struggling regional economy to buy seaside summer homes for the price of a used SUV.

In Twillingate, at least 17 inns and bed-and-breakfasts regularly book Americans and Europeans, up from just two a decade ago. The tourists come to watch the shimmering procession of icebergs the size of city blocks that calve off the coast of Greenland and ride the Labrador Current past town between May and July. After the icebergs are gone, the waters fill with humpback, right and fin whales that spend summer feeding offshore.

Climate change is attracting some of the tourism. The average temperature during the summers in Newfoundland and Labrador has increased by nearly four degrees Fahrenheit over the past 20 years, says David Phillips, the Canadian government’s senior climatologist. From 2001 through 2005, there were an average of 123 days when the weather was 77 degrees or warmer. In 1991-1995, it averaged just 63 days. Over the last 50 years the growing season — the gap between winter’s last frost and autumn’s first — has widened by three weeks.

Some Americans have begun to try to flip properties. New York artist Brian Byrne (sic) and his business partner bought a waterfront, six-bedroom home two years ago for $72,000. Now they’re asking $170,000. "There’s a lot of potential up there for tourism," Mr. Byrne (sic) says. 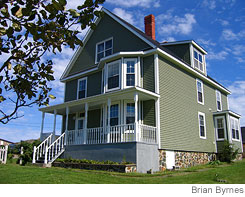 Brian Bryne (sic), a New York City artist, along with a partner, bought this Newfoundland house as a speculative investment.  Source of photo:  online version of the WSJ article quoted and cited above.