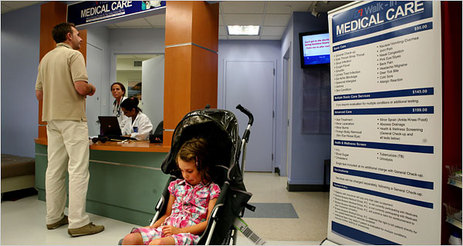 "Eve Linney, 5, who had an infected finger, went with her family last week to a walk-in clinic at a Duane Reade drugstore on Broadway in Manhattan. Her father, John, is at the counter."  Source of caption and photo:  online version of the NYT article quoted and cited below.

Clayton Christensen and co-authors in Seeing What’s Next, make a plausible case for the improvement of health care through disruptive innovation.  A key aspect of their vision is the increasing role of nurse-practitioners in taking on increasingly routinized tasks, a development they see as generally both effective, and cost-efficient.

The article excerpted below suggests that this trend is promising, if it does not get killed by the government, and by organized medical doctors protecting their turf from competition.

(p. A1)  The concept has been called urgent care “lite”:  Patients who are tired of waiting days to see a doctor for bronchitis, pinkeye or a sprained ankle can instead walk into a nearby drugstore and, at lower cost, with brief waits, see a doctor or a nurse and then fill a prescription on the spot.

With demand for primary care doctors surpassing the supply in many parts of the country, the number of these retail clinics in drugstores has exploded over the past two years, and several companies operating them are now aggressively seeking to open clinics in New York City.

More than 700 clinics are operating across the country at chain stores including Wal-Mart, CVS, Walgreens and Duane Reade.

New York State regulators are investigating the business relationships between drugstore companies and medical providers to determine whether the clinics are being used improperly to increase business or steer patients to the pharmacies in which the clinics are located.

And doctors’ groups, whose members stand to lose business from the clinics, are citing concerns about standards of care, safety and hygiene, and they have urged the federal and state governments to step in to more rigorously regulate the new businesses.

(p. A16)  Patients, however, have flocked to the clinics, according to a new industry group, the Convenient Care Association.

“I think it’s great you don’t have to make an appointment. That could take weeks,” said Ezequiel Strachan, 33, who lives in Manhattan and walked into the clinic at the Duane Reade store at 50th Street and Broadway on a recent morning for treatment of a sore throat. “People here value their time a lot.”

The average waiting time for an exam at such clinics nationwide is 15 to 25 minutes, according to the Convenient Care Association.

The association estimated that 70 percent of clinic patients have health insurance and are using the clinics because of convenience. For them, costs may not be much different from those at doctors’ offices, because the same insurance co-payments apply. But uninsured patients could reap substantial savings.

In New York City, one in five residents lacks a regular doctor and one in six is uninsured, according to a recent survey by the city’s Department of Health and Mental Hygiene, and overcrowded emergency rooms are often their first resort for routine care.

MinuteClinic officials insisted that there was nothing improper in the relationships between providers and the drugstores and that medical care is not being compromised.

“We are transparent with regulators,” said Michael C. Howe, the chief executive of MinuteClinic, which is based in Minneapolis and operates more than 200 clinics nationwide. using the motto “You’re Sick, We’re Quick.”

Mr. Howe said the concerns of doctors’ groups and other critics “are being raised by voices of people who have not really studied the model.”

Preliminary data from a two-year study of claims from MinuteClinic by a Minnesota health maintenance organization, HealthPartners, which was released to The Minneapolis Star Tribune in July, showed that each visit to the retail clinic cost an average of $18 less than a visit to other primary-care clinics, but that pharmacy costs were $4 higher per patient.

Duane Reade, New York City’s largest drugstore chain, which opened four clinics in Manhattan in May, plans to open as many as 60 more across the city in the next 18 months. A key difference at the Duane Reade clinics is that they use doctors, while nurse practitioners and physician assistants typically provide the care at most retail clinics.

(Note:  the title of the online version is "Drugstore Clinics Spread, and Scrutiny Grows."  Ellipses added.) 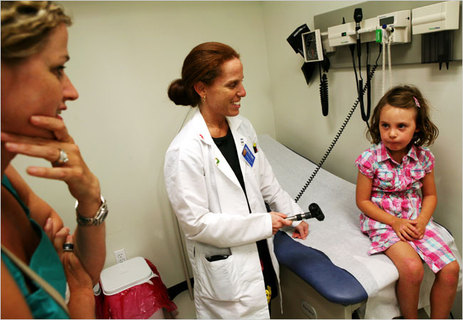 "Dr. Maggie Bertisch saw Eve while her mother, Claire, waited."  Source of caption and photo:  online version of the NYT article quoted and cited above.