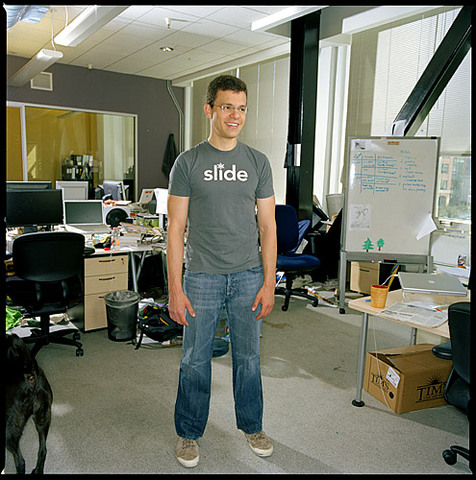 "NAME Max Levchin.  AGE 32.  NET WORTH Roughly $100 million."  Source of caption and photo:  online version of the NYT article quoted and cited below.

(p. 1)  SAN FRANCISCO — Max Levchin is not easily distracted from his work.

A few years ago, Mr. Levchin, one of the young princes of Silicon Valley, bought his first home, a 12-room Edwardian high atop a hill here, for $3.4 million. But Mr. Levchin, who made a fortune at age 27 selling PayPal, the online payment service he helped start in 1998, never moved in. He sold it two years later without having slept there for even one night.

Mr. Levchin, who is now 32, is typical of a new generation of junior titans in Silicon Valley who might be called the prematurely rich — techies worth tens of millions of dollars, sometimes more, at an age when many others are just starting to figure out what to do with their lives.

The Internet, a low-overhead medium with a global reach, has greatly accelerated the wealth creation phenomenon, producing a larger breed of multimillionaires even younger and richer than in the past.

They are happy to be wealthy, of course, but many of these baby-faced technology tycoons often seem indifferent to the buying power of their money, at least at this stage of their lives. Instead, nearly all of them have chosen to throw themselves back into a start-up, not so much because they want a spectacular new home or a personal jet — though many of them do — but be-(p. 16)cause they are in a competition with themselves and one another.

“For most of us, doing it again means surpassing what we’ve done previously,” said Peter A. Thiel, Mr. Levchin’s partner at PayPal, who also has started a new business, a hedge fund called Clarium Capital. “And that can be a really high bar.”

Maximillian Rafael Levchin was born and raised in Kiev, Ukraine, a Jew living under Soviet rule for 16 years. As the Soviet Union was crumbling, the family moved to the United States and settled in Chicago. But the worst year of his life, he said, was not when he was growing up but after eBay bought PayPal.

He thought he would spend the time after the sale “exploring my inner self.” Instead, he spent the better part of 12 months “feeling worthless and stupid” and baffled by what he might do with the remainder of his life. He felt too young to retire or downshift a gear or two — and too restless to become a philanthropist.

“I enjoy sitting on nice beaches and hanging out with my girlfriend and playing with my dog, but that’s three hours a day,” Mr. Levchin said. “What about the remaining 18 hours I’m awake?”

In Silicon Valley, said Robert I. Sutton, a professor of management science and engineering at Stanford and co-founder of the Stanford Technology Ventures Program, remaining relevant, if not also admired and respected, requires that an entrepreneur continue to speed along in the fast lane.

“In other parts of the country, things like a great estate are the symbols people most respect,” Mr. Sutton said. “But here, the greatest status symbol is a person’s ability,” he added, to “still bring out hot new companies” and show that you are “working on the hot new technologies.” 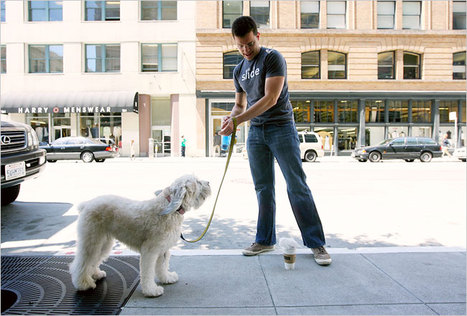 "TAKING FIVE.  Max Levchin spends a moment with his dog, Uma, but usually he works 15 to 18 hours a day at his start-up company, Slide.com."  Source of caption and photo:  online version of the NYT article quoted and cited above.