The officers’ banquet of the annual convention of the Sovereign Grand Lodge of the Independent Order of Odd Fellows.  Source of the photo:  online version of the NYT article quoted and cited below.

Before the New Deal and the Great Society, voluntary mutual assistance organizations provided insurance and help in the face of life’s setbacks.  One such fraternal orgainization was the Odd Fellows.

(p. 12)  Since his installation as top Odd Fellow, Mr. Robbins has warned that this order, dedicated to caring for the widowed, the orphaned and the needy, is in a “state of crisis.” Members are dying by the thousands, local lodges are closing by the dozens, and actual participation among the 289,000 members is dropping. If the people sitting before him do not heed his call to replenish the ranks, they will be the Odd Men and Women Out — defunct, extinct, done.

“Unless we can do something to turn the membership losses into significant gains in the next couple of years,” he says later, “we may be at a point where we can’t recover.”

Once we were a nation of joiners, and so many joined the Odd Fellows, a fraternal organization whose name stems from an English journalist’s observation in 1745. He found it “odd” to see “fellows,” rather than the aristocracy, helping widows, orphans and one another. The name stuck, oddly.

In many communities, you can still find an old I.O.O.F. building, a place of some mystery, where the rituals would include acting out the story of the Good Samaritan. Members were to apply that story to real life by aiding their brothers and sisters, chipping in to pay burial costs, for example. You merely had to express belief in one Creator to be eligible; atheists and pantheists need not apply.

Odd Fellows tended to frown on alcohol, loved bestowing medals on one another, and reveled in seeing their sword-carrying, uniformed brothers, the chevaliers of the Patriarchs Militant, march in Main Street parades. In their small worlds, Odd Fellows mattered.

Then came social changes to dull the appeal of fraternal organizations. Tighter government regulations forced the Odd Fellows out of their signature cause, orphanages, while baby boomers found all the pomp and secrecy to be, um, silly. 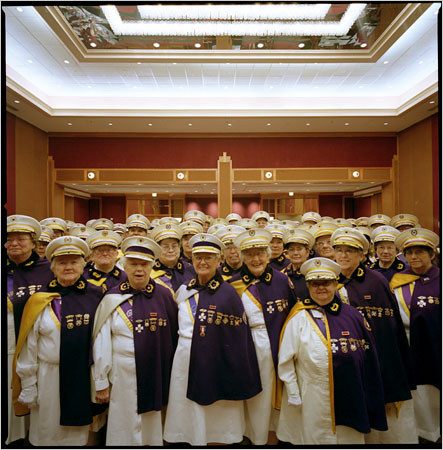 "The Independent Order of Odd Fellows, dedicated to caring for the widowed, the orphaned and the needy, is in a “state of crisis.”"  Source of the photo:  online version of the NYT article quoted and cited above.