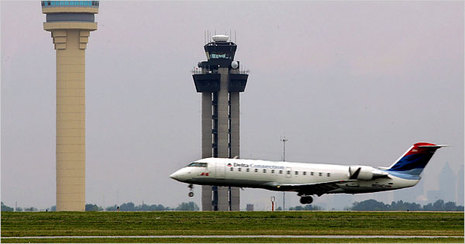 "Delta Air Lines uses G.P.S. technology to reduce the time its planes spend on the runway."  Source of caption and photo:  online version of the NYT article quoted and cited below.

(p. C1)  WASHINGTON, Sept. 4 — At Hartsfield-Jackson Atlanta International Airport, Delta Air Lines said its jets take off an average of 10 minutes after pushing back from the gate — three minutes faster than in previous years.

Using new technology, planes take off following a narrow route, so that that jets right behind them taking different routes do not have to wait as long. That makes the system move a bit faster.

“The pilots say, ‘Wow, this is kind of neat,’ ” said Joseph C. Kolshak, executive vice president for operations at Delta.

Delta, and also Alaska Airlines and U.P.S., is demonstrating pieces of the possible future of the nation’s air traffic system, hinting at what aviation might be like — if the airlines and the federal government can get the details worked out.

All three airlines use refinements based on the constellation of G.P.S., or global positioning system, satellites. Many of these save at most a few minutes. But in a crowded system plagued by delays, that may be enough to help smooth out bottlenecks.

The carriers’ use of satellite navigation and other tools and techniques represents a step toward replacing a 50-year-old system of radar and radio beacons.

In the process, they are pulling along a slow-moving government agency, the Federal Aviation Administration, that is eager for better air traffic control systems but short on money and the authority to put changes in place.

It is a revolution in technology, but also in politics. Previously, the F.A.A. usually bought new systems on the ground and told airlines to equip themselves to use them; now the airlines are taking the initiative to outfit their planes, with safety regulation from the F.A.A.

Airlines are even developing their own approach patterns for airports, which has almost always been a government job.

U.P.S. Airlines, working with Aviation Communications and Surveillance Systems, based in Phoenix, is developing a landing pattern based on separating planes by time, not distance, so they land at the briefest safe interval.

“We’re going to create the future, because we think we know (p. C5) where it’s going to go,” said Karen Lee, director of operations at U.P.S. This is in contrast to the traditional way of doing business, typified by “the F.A.A. tells us what the roadmap is,” she said, then “we’ll start building the stuff to do it.” 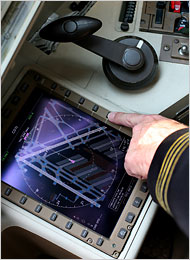 "A device that U.P.S. installed in the cockpit of one of its cargo planes to display traffic information."  Source of caption and photo:  online version of the NYT article quoted and cited above.