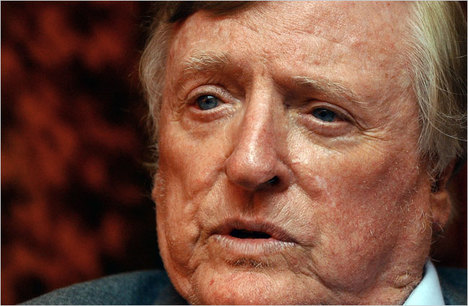 “William F. Buckley Jr. in 2004.” Source of caption and photo: online version of the NYT obituary cited below.
I write on Weds., Feb. 27th, at about 1:30 PM. As I ate an early lunch a couple of hours ago, I was listening to U.S. Senate speeches on C-SPAN. After a good speech on Iraq by Senator Lindsey Graham, Senator Joe Lieberman appeared and interupted the proceedings, asking the Senate’s indulgence for him to speak for 10 minutes on a special topic.
He announced that William F. Buckley, Jr. had passed away today (2/27/08); and then he delivered a heartfelt, sometimes humorous, and wholly appropriate tribute to Buckley.
I have mentioned a couple of my favorite Buckley stories in an earlier entry.
Lieberman emphasized that Buckley cared about ideas, and that is most important to emphasize. Listening to Buckley speak was entertaining, and educational.
Strange what we remember–when I think of Buckley, the following episode always comes to mind.
Sometime while I was an undergraduate at Wabash (1971-1974), my mentor Ben Rogge arranged to have his friend Bill Buckley give a speech on campus. Ths speech was paid for by another of Rogge’s friends, Pierre Goodrich, the founder of Liberty Fund.
After the speech there was to be a special reception for members of the John Van Sickle Club, the small libertarian club on campus, of which I was a member.
The speech was well-attended, and some non-members of the Club got wind of the reception and tried to gain admittance. They were turned away, and were miffed, and complained.
The issue made it into the college newspaper, and I wrote a letter to the editor defending the John Van Sickle Club, using one of Rogge’s favorite sayings: “he who pays the piper, calls the tune.”
Some of the details are fuzzy, but I ended up in Rogge’s office, and heard from him that he was not happy with my letter. He felt that Goodrich might be embarrassed by the campus turmoil on the issue.
I remember feeling devasted that Rogge was annoyed with me. I apologized profusely (although I still think I had a point). Rogge must have seen my cresfallen appearance, because he changed his tone and ended the conversation by saying that I shouldn’t worry about it, because Goodrich probably would never see the newspaper article and letters, anyway.