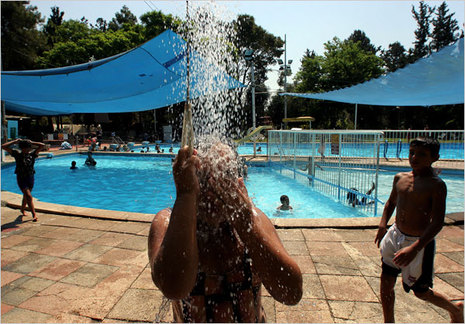 “Once for communal use, the Kibbutz Yasur swimming pool is now run as a private business.”  Source of caption and photo:  online version of the NYT article quoted and cited below.

(p. A1)  KIBBUTZ YASUR, Israel — For much of Israel’s existence, the kibbutz embodied its highest ideals: collective labor, love of the land and a no-frills egalitarianism.

But starting in the 1980s, when socialism was on a global downward spiral and the country was mired in hyperinflation, Israel’s 250 or so kibbutzim seemed doomed. Their debt mounted and their group dining halls grew empty as the young moved away.

Now, in a surprising third act, the kibbutzim are again thriving. Only in 2007 they are less about pure socialism than a kind of suburbanized version of it.

On most kibbutzim, food and laundry services are now privatized; on many, houses may be transferred to individual members, and newcomers can buy in. While the major assets of the kibbutzim are still collectively owned, the communities are now largely run by professional managers rather than by popular vote. And, most important, not everyone is paid the same.

Today, most are undergoing a process of privatization, though kibbutz officials prefer a more euphemistic term: renewal.

Mr. Varol was born on a kibbutz in the far north, but he left at 18. He is at peace in his new home, but bitter about the past. “My parents worked all their lives, carrying at least 10 parasites on their backs,” he said. “If they’d worked that hard in the city for as many years, I’d have had quite an inheritance coming to me by now.”

(Note:  the online version of the article had the title: “KIBBUTZ YASUR JOURNAL; The Kibbutz Sheds Socialism And Regains Lost Popularity.”) 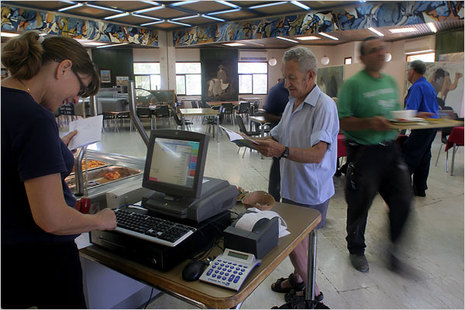 “The dining room in Kibbutz Nachshon charges members $4 per meal. While kibbutzim once paid all members equally and provided food, today many have adopted a system of varying wages and require payment for many services.”  Source of caption and photo:  online version of the NYT article quoted and cited above.