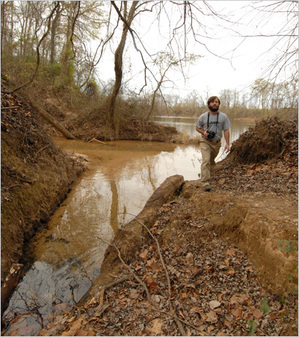 “Nelson Brooke, the executive director of Black Warrior Riverkeeper, walked along an area of the river near Moundville, Ala.” Source of the caption and photo: online version of the NYT article quoted and cited below.

(p. A12) MOUNDVILLE, Ala. — After residents of the Riverbend Farms subdivision noticed that an oily, fetid substance had begun fouling the Black Warrior River, which runs through their backyards, Mark Storey, a retired petroleum plant worker, hopped into his boat to follow it upstream to its source.
It turned out to be an old chemical factory that had been converted into Alabama’s first biodiesel plant, a refinery that intended to turn soybean oil into earth-friendly fuel.
“I’m all for the plant,” Mr. Storey said. “But I was really amazed that a plant like that would produce anything that could get into the river without taking the necessary precautions.”
But the oily sheen on the water returned again and again, and a laboratory analysis of a sample taken in March 2007 revealed that the ribbon of oil and grease being released by the plant — it resembled Italian salad dressing — was 450 times higher than permit levels typically allow, and that it had drifted at least two miles downstream.
The spills, at the Alabama Biodiesel Corporation plant outside this city about 17 miles from Tuscaloosa, are similar to others that have come from biofuel plants in the Midwest. The discharges, which can be hazardous to birds and fish, have many people scratching their heads over the seeming incongruity of pollution from an industry that sells products with the promise of blue skies and clear streams.
. . .
“They’re environmental Jimmy Swaggarts, in my opinion,” said Representative Brian P. Bilbray, Republican of California, who spoke out against the $18 billion energy package recently passed by Congress that provides tax credits for biofuels.

For the full story, see:
BRENDA GOODMAN. “Pollution Is Called a Byproduct of a ‘Clean’ Fuel.” The New York Times (Tues., March 11, 2008): A12.
(Note: ellipses added.)
(Note: At one point, the online version of the article, as quoted above, was very slightly different (and clearer) than the print version.) 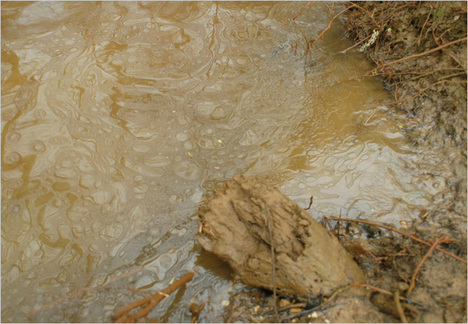 “Oil and grease from a biodiesel plant had been released.” Source of the caption and photo: online version of the NYT article quoted and cited above.

One thought on “Pollution from Refinery Producing “Earth-Friendly Fuel””