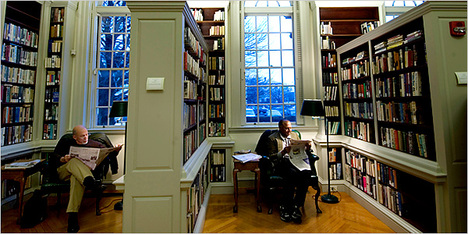 “TRADITION; Redwood Library and Athenaeum, Newport, R.I., dates back to 1747.” Source of caption and photo: online version of the NYT article quoted and cited below.

(p. D1) A GROUP of first-time visitors to the Providence Athenaeum climbed the steep stones steps to the imposing front door. One pried open the door tentatively, peered inside and exclaimed, “Oh, this is what a library is supposed to look like!”
This scene was observed by Alison Maxell, executive director of the athenaeum, who said that time and again, she has seen this same reaction: curiosity followed by wonderment.
. . .
(p. D4) THE New England athenaeums I visited on a recent trip maintain not only active memberships, but also some peculiar terminology. Members are commonly called proprietors; some athenaeums distinguish share-holding proprietors from a second tier of members, called subscribers. At the Portsmouth Athenaeum, the director is called the keeper.
Many athenaeums maintain lists of rules that spell out consequences for offenses like writing in books. Some prohibit pens and provide pencils for notation, as well as cotton gloves for handling aged materials. Large or old books often must be rested on wedge-shaped foam cradles to protect brittle spines.
Surprisingly, the Boston Athenaeum permits dogs — those that behave, a staff member was quick to add.
These athenaeums also provide, in those areas where talking aloud is encouraged, lively opportunities for exchanging ideas with other devotees of literature, arts and sciences.
“In addition to having access to our book stock, members find intellectual stimulation in our exhibitions and by being part of discussion groups,” said Richard Wendorf, director and librarian of the Boston Athenaeum and the editor of “America’s Membership Libraries” (Oak Knoll Press, 2007), which details histories of 16 of the largest membership libraries. 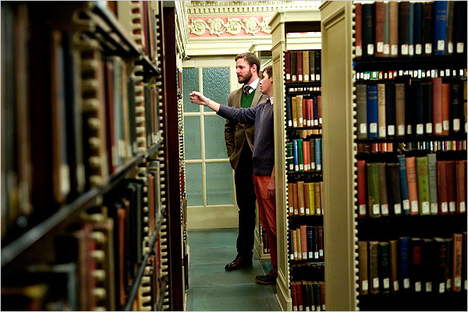 “While roaming through stacks of the Boston Athenaeum, one encounters books from completely different eras, making for random discoveries.” Source of caption and photo: online version of the NYT article quoted and cited above.