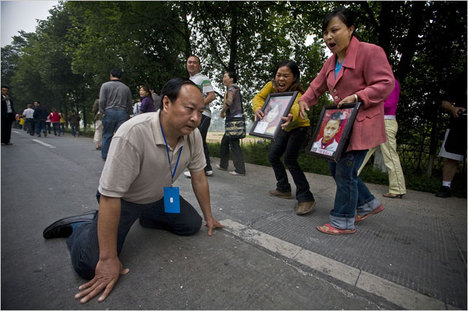 “Jiang Guohua, the Communist Party boss of Mianzhu, knelt Sunday to ask parents of earthquake victims to abandon their protest.” Source of caption and photo: online version of the NYT article quoted and cited below.

(p. A10) One man shouted, “Was this a natural disaster or a man-made disaster?” In unison, the parents shouted back: “Man-made!”

(p. A1) DUJIANGYAN, China — Bereaved parents whose children were crushed to death in their classrooms during the earthquake in Sichuan Province have turned mourning ceremonies into protests in recent days, forcing officials to address growing political repercussions over shoddy construction of public schools.
Parents of the estimated 10,000 children who lost their lives in the quake have grown so enraged about collapsed schools that they have overcome their usual caution about confronting Communist Party officials. Many say they are especially upset that some schools for poor students crumbled into rubble even though government offices and more elite schools not far away survived the May 12 quake largely intact.
On Tuesday, an informal gathering of parents at Juyuan Middle School in Dujiangyan to commemorate their children gave way to unbridled fury. One of the fathers in attendance, a quarry worker named Liu Lifu, grabbed the microphone and began calling for justice. His 15-year-old daughter, Liu Li, was killed along with her entire class during a biology lesson.
“We demand that the government severely punish the killers who caused the collapse of the school building,” he shouted. “Please, everyone sign the petition so we can find out the truth.”
The crowd grew more agitated. Some parents said local officials had known for years that the school was unsafe but refused to take action. Others recalled that two hours passed before rescue workers showed up; even then, they stopped working at 10 p.m. on the night of the earthquake and did not resume the search until 9 a.m. the next day.
Although there is no official casualty count, only 13 of the school’s 900 students came out alive, parents said. “The people responsible for this should be brought here and have a bullet put in their head,” said Luo Guanmin, a farmer who was cradling a photo of his 16-year-old daughter, Luo Dan.
Sharp confrontations between protesters and officials began over the weekend in several towns in northern Sichuan. Hundreds of parents whose children died at the Fuxin No. 2 Primary School in the city of Mianzhu staged an impromptu rally on Saturday. They surrounded an official who tried to assure them that their complaints were being taken seriously, screaming and yelling in her face until she fainted.
The next day, the Communist (p. A10) Party’s top official in Mianzhu came out to talk with the parents and to try to stop them from marching to Chengdu, the provincial capital, where they sought to prevail on higher-level authorities to investigate. The local party boss, Jiang Guohua, dropped to his knees and pleaded with them to abandon the protest, but the parents shouted in his face and continued their march.
Later, as the crowd surged into the hundreds, some parents clashed with the police, leaving several bleeding and trembling with emotion.
The protests threaten to undermine the government’s attempts to promote its response to the quake as effective and to highlight heroic rescue efforts by the People’s Liberation Army, which has dispatched 150,000 soldiers to the region. Censors have blocked detailed reporting of the schools controversy by the state-run media, but a photo of Mr. Jiang kneeling before protesters has become a sensation on some Web forums, bringing national attention to the incident.
. . .
. . . all at once the women doubled over in agony, a chorus of 100 mothers wailing over the loss of sons and daughters who, because of China’s population control policy, were their only children. The husbands wept in silence, paralyzed by the storm of emotion. 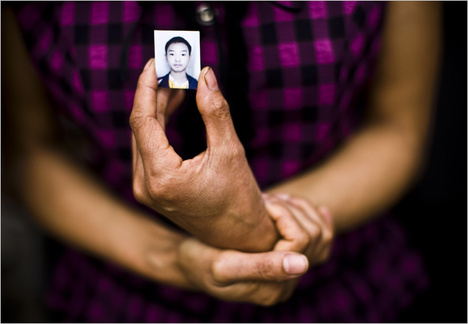 “A memorial service for hundreds of students of Juyuan Middle School in Dujiangyan, where a mother held a picture of her son, turned into an angry protest.” Source of caption and photo: online version of the NYT article quoted and cited above.