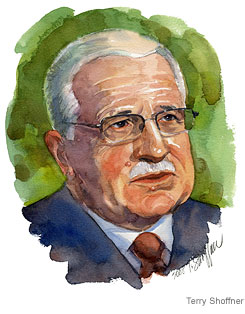 President of the Czech Republic, Vaclav Klaus. Source of photo: online version of the WSJ article quoted and cited below.

In addition to his insights into global warming, Vaclav Klaus is an advocate of the work of Joseph Schumpeter.

(p. A9) Mr. Klaus is . . . interested in the politics of global warming. He has written a book, tentatively titled “Blue, Not Green Planet,” published in Czech last year and due out in English translation in the U.S. this May. The main question of the book is in its subtitle: “What is in danger: climate or freedom?”
He likens global-warming alarmism to communism, which he experienced first-hand in Cold War Czechoslovakia, then a Soviet satellite. While the communists argued that we must all sacrifice some freedom in pursuit of “equality,” the “warmists,” as Mr. Klaus calls them, want us to sacrifice liberty — especially economic liberty — to prevent a change in climate. In both cases, in Mr. Klaus’s view, the costs of achieving the goal, and the impossibility of truly doing so, argue strongly against paying a price of freedom.
. . .
In Europe, Mr. Klaus has the reputation of a firebrand, if not a loose cannon. This is a president, after all, who calls global warming “alarmism” a “radical political project” based in a form of “Malthusianism” that is itself grounded on a “cynical approach [by] those who themselves are sufficiently well-off.”
“It is not about climatology,” he insists. “It is about freedom.”