“Gianluca Pompei, Francesca Di Pietro and son, Mario, 2, shopping in Rome. They have cut spending on entertainment.” Source of caption and photo: online version of the NYT article quoted and cited below.

(p. C1) LES ULIS, France — When their local bakery in this town south of Paris raised the price of a baguette for the third time in six months, Anne-Laure Renard and Guy Talpot bought a bread maker. When gasoline became their biggest single expense, they sold one of their two cars.
Their combined annual income of 40,000 euros, about $62,500, lands Ms. Renard, a teacher, and Mr. Talpot, a postal worker, smack in the middle of France’s middle class. And over the last year, prices in France have risen four times as fast as their salaries.
At the end of every month, they blow past their bank account’s $900 overdraft limit, plunging themselves deeper into a spiral of greater resourcefulness and regret.
“In France, when you can’t afford a baguette anymore, you know you’re in trouble,” Ms. Renard said one recent evening in her kitchen, as her partner measured powdered milk for their 13-month-old son, Vincent. “The French Revolution started with bread riots.”
The European dream is under assault, as the wave of inflation sweeping the globe mixes with this continent’s long-stagnant wages. Families that once enjoyed Europe’s vaunted quality of life are pinching pennies to buy necessities, and cutting back on extras like movies and vacations abroad.
Potentially more disturbing — especially to the political and social order — are the millions across the continent grappling with the realization that they may have lives worse, not better, than their parents. 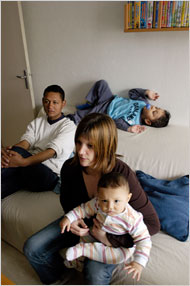 “Anne-Laure Renard, a teacher, and Guy Talpot, a postal worker, sold one car and bought a bread maker to cut expenses. Prices have risen four times as fast as salaries in France in the last year.” Source of caption and photo: online version of the NYT article quoted and cited above.