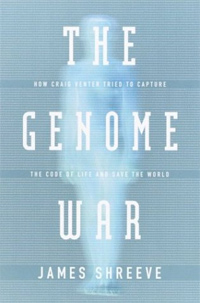 The race to decode the genome always seemed like an appealing test case of the relative efficiency of government versus private enterprise. But the results seem muddy because sometimes in the media the outcome has been described as a win for Craig Venter’s private Celera corporation, and other times, as a tie.
For years I have wanted to learn more, and now I have finally done so by reading James Shreeve’s fascinating The Genome War.
It is clear from the book that the entrance of Celera, greatly accelerated the government’s own efforts to sequence the human genome. So one important lesson is that, no matter who “won the race, the consumer benefited from the entrance of a private competitor.
Also clear, is that Venter’s group took advantage of public resources and results. Their primary zeal was for sequencing the genome, rather than for promoting private enterprise.
Regrettably, this is a common case: many entrepreneurs take the institutions of their economy as given, and make use of government when it suits their short-run objectives.
Officially the results were announced as a tie. But the main bone of contention had been over Celera’s advocacy and use of the “whole genome shotgun” technique for sequencing the gene. The government group had attacked the method as impractical and unreliable.
The proof of who “won” in a deeper sense, was that after the contest was over, everyone, including the government, was using the “whole genome shotgun” technique.
Another lesson is that the usual scientific goal of immediately releasing findings, may actually reduce the information available to the public. If, as with the genome, the information is costly to obtain, allowing a period of proprietary ownership of the information, provides private entrepreneurs with the incentive to discover the information in the first place. Another case of unintended consequences: if we fully follow the alleged idealism of academic scientists, we will end up with less scientific knowledge, not more.

Reference to book:
Shreeve, James. The Genome War: How Craig Venter Tried to Capture the Code of Life and Save the World. 1st ed. New York: Alfred A. Knopf, 2004.
(Note: My comments are based on the whole book. A paragraph on pp. 366-367 is especially important.)