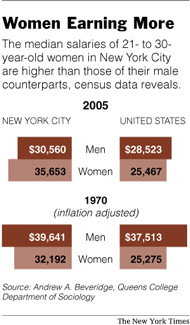 Source of the graph:  online version of the NYT article cited below.

(p. A1)  Young women in New York and several of the nation’s other largest cities who work full time have forged ahead of men in wages, according to an analysis of recent census data.

The shift has occurred in New York since 2000 and even earlier in Los Angeles, Dallas and a few other cities.

Economists consider it striking because the wage gap between men and women nationally has narrowed more slowly and has even widened in recent years among one part of that group: college-educated women in their 20s. But in New York, young college-educated women’s wages as a percentage of men’s rose slightly between 2000 and 2005.

The analysis was prepared by Andrew A. Beveridge, a demographer at Queens College, who first reported his findings in Gotham Gazette, published online by the Citizens Union Foundation. It shows that women of all educational levels from 21 to 30 living in New York City and working full time made 117 percent of men’s wages, and even more in Dallas, 120 percent. Nationwide, that group of women made much less: 89 percent of the average full-time pay for men.

Just why young women at all educational levels in New York and other big cities have fared better than their peers elsewhere is a matter of some debate. But a major reason, experts say, is that women have been graduating from college in larger numbers than men, and that many of those women seem to be gravitating toward major urban areas.

Source of the graph:  online version of the NYT article cited above.