A few years ago I presented a paper at the meetings of Society for Social Studies of Science in which I mentioned Nordhaus’s wonderful paper in which he measures advances in technology that produce illumination. Some of the technologies represent leapfrog advances that are part of Schumpeter’s process of creative destruction.
At the end of my presentation, a member of the audience gave me a reference to the new L.E.D. light technology that he suggested was the next leapfrog advance. (Alas, I do not remember his name.)

(p. C3) L.E.D. bulbs, with their brighter light and longer life, have already replaced standard bulbs in many of the nation’s traffic lights. Indeed, the red, green and yellow signals are — aside from the tiny blinking red light on a DVD player, a cellphone or another electronic device — probably the most familiar application of the technology.

But it is showing up in more prominent spots. The ball that descends in Times Square on New Year’s Eve is illuminated with L.E.D.’s. And the managers of the Empire State Building are considering a proposal to light it with L.E.D. fixtures, which would allow them to remotely change the building’s colors to one of millions of variations.
. . .
The problem, though, is the price. A standard 60-watt incandescent usually costs less than $1. An equivalent compact fluorescent is about $2. But in Europe this September, Philips, the Dutch company dealing in consumer electronics, health care machines and lighting, is to introduce the Ledino, its first L.E.D. replacement for a standard incandescent. Priced at $107 a bulb, it is unlikely to have more than a few takers.
“L.E.D. performance is there, but the price is not,” said Kevin Dowling, a Philips Lighting vice president . . .
. . .
“The Marcus Center lighting will require no maintenance for 15 years,” Mr. Gregory said. “That’s a dream for a lighting designer.”
But he does not expect standard bulbs to disappear totally. Just as the invention of the light bulb did not completely kill the candle and kerosene lamp markets, Mr. Gregory said, “there will always be a need for incandescent bulbs. They will never totally go away.”
“The way an incandescent bulb plays on the face on a Broadway makeup mirror,” he said, “you can never duplicate that.”

The reference to the Nordhaus paper is:
Nordhaus, William D. “Do Real-Output and Real-Wage Measures Capture Reality? The History of Light Suggests Not.” In The Economics of New Goods, edited by Robert J. Gordon and Timothy F. Bresnahan, Chicago: University of Chicago Press for National Bureau of Economic Research, 1997, pp. 29-66. 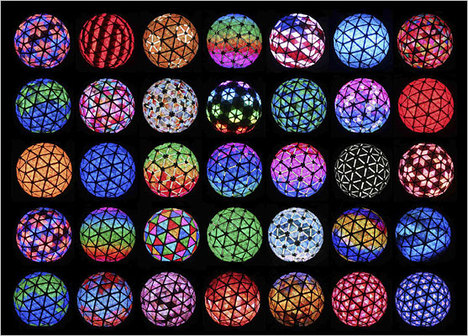 “The full spectrum of color, design and programming available for the Times Square ball.” Source of the caption and photo: online version of the NYT article quoted and cited above.

One thought on “L.E.D.’s as the Next Leapfrog Advance in Light”