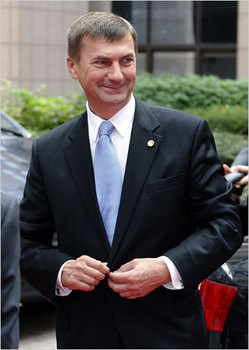 “Andrus Ansip, leader of Estonia, an ex-Soviet Republic.” Source of caption and photo: online version of the NYT article quoted and cited below.

An earlier entry suggested that Estonian Prime Minister Andrus Ansip’s support for Steve Forbes’ flat tax, had helped Estonia achieve a high rate of growth.
Apparently there is some sentiment in Estonia to stay the course:

(p. B6) TALLINN, Estonia — For nearly two decades, Estonia embraced capitalism with such gusto that it seemed to be channeling the laissez-faire philosophy of Milton Friedman. From its policies meant to attract foreign investors to its flat tax and freewheeling business culture, it stood out as the former Soviet republic most adept at turning post-Communist chaos into a thriving market economy.
Now Estonians, and some of their Baltic neighbors, are slogging through their first serious economic downturn since liberation from the Soviet grip in the early 1990s.
. . .
Whatever happens, government officials say there will be no betrayal of Friedman’s philosophy. “We will stay a laissez-faire economy,” said Juhan Parts, Estonia’s minister of the economy.
. . .
“I’m an optimist,” said Marje Josing, director of the Estonian Institute for Economic Research. “Fifteen years ago things looked bad, but they managed. A little real-life pressure won’t hurt.”
Indeed, so far the downturn has done little to discourage Estonia’s ambitious entrepreneurs. If anything, it has made them look more avidly elsewhere for growth.
“Estonia may be a small country,” Tarmo Prikk, chief executive of Thulema, an office furniture maker, said with a laugh. “But my ego is bigger.”