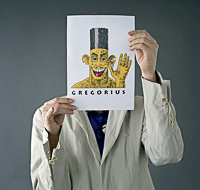 A cartoon of the cartoonist who calls himself Gregorius Nekschot. Source of the photo: online version of the WSJ article quoted and cited below.

(p. W1) Amsterdam
On a sunny May morning, six plainclothes police officers, two uniformed policemen and a trio of functionaries from the state prosecutor’s office closed in on a small apartment in Amsterdam. Their quarry: a skinny Dutch cartoonist with a rude sense of humor. Informed that he was suspected of sketching offensive drawings of Muslims and other minorities, the Dutchman surrendered without a struggle.
“I never expected the Spanish Inquisition,” recalls the cartoonist, who goes by the nom de plume Gregorius Nekschot, quoting the British comedy team Monty Python. A fan of ribald gags, he’s a caustic foe of religion, particularly Islam. The Quran, crucifixion, sexual organs and goats are among his favorite motifs.
Mr. Nekschot, whose cartoons had appeared mainly on his own Web site, spent the night in a jail cell. Police grabbed his computer, a hard drive and sketch pads. He’s been summoned for further questioning later this month by prosecutors. He hasn’t been charged with a crime, but the prosecutor’s office says he’s been under investigation for three years on suspicion that he violated a Dutch law that forbids discrimination on the basis of race, religion or sexual orientation.
The cartoon affair has come as a shock to a country that sees itself as a bastion of tolerance, a tradition forged by grim memories of bloody conflict between Catholics and Protestants. The Netherlands sheltered Jews and other refugees from the Spanish Inquisition, and Calvinists fleeing persecution in France. Its thinkers helped nurture the 18th-century Enlightenment. Prostitutes, marijuana and pornography have been legal for decades.
“This is serious. It is about freedom of speech,” says Mark Rutte, the leader of a center-right opposition party. Some of Mr. Nekschot’s oeuvre is “really disgusting,” he says, “but that is free speech.”
. . .
Mr. Nekschot, who calls the investigation “surreal,” says, “Not even Monty Python could have come up with this.” (His pen name, Gregorius Nekschot, is a mocking tribute to Gregory IX, a 13th-century pope who set up a Vatican department to hunt down and execute heretics. Nekschot means “shot in the neck” in Dutch.) Some Muslim groups have voiced dismay at his arrest as well. The head of an organization of Moroccan preachers in Holland said authorities seemed “more afraid” of offending Islam than Muslims.
. . .
The cartoonist blames his woes on what he calls Holland’s “political correctness industry,” a network of often state-funded organizations set up to protect Muslims and other minority groups. One of these, an Internet monitoring group known as MDI, says it received dozens of complaints about the cartoonist’s mockery of Islam and first reported him to the prosecutor’s office in 2005.
“We’re not sure what he does is illegal, but there is a possibility that it is not legal,” says the group’s head, Niels van Tamelen. Many of the complaints, he says, came from followers of a controversial Muslim convert called Abdul-Jabbar van de Ven.
Mr. Van de Ven caused an uproar after the 2004 murder of Mr. Van Gogh, when he seemed to welcome the killing on national TV. He said Mr. Wilders, the anti-immigrant legislator, also deserved to die, preferably from cancer. Mr. Nekschot, appalled by the outburst, caricatured the convert as a fatwa-spewing fanatic.

For the full story, see:
ANDREW HIGGINS. “Why Islam Is Unfunny for a Cartoonist; The arrest of a controversial Dutch cartoonist has set off a wave of protests. The case is raising questions for a changing Europe about free speech, religion and art.” The Wall Street Journal (Sat., JULY 12, 2008): W1 & W6.
(Note: ellipses added.)