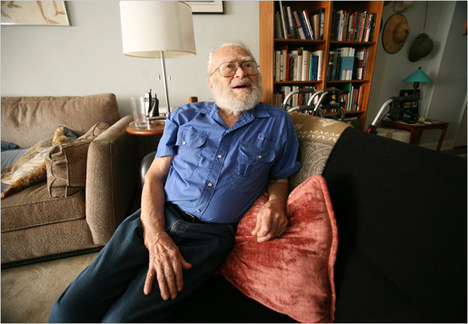 “Morton Sobell, 91, at his home in the Riverdale section of the Bronx.” Source for caption and photo: online version of the NYT article quoted and cited below.

The left has long chastised the right, for having wrongly persecuted the Rosenbergs. Score one for the right:

(p. A1) In 1951, Morton Sobell was tried and convicted with Julius and Ethel Rosenberg on espionage charges. He served more than 18 years in Alcatraz and other federal prisons, traveled to Cuba and Vietnam after his release in 1969 and became an advocate for progressive causes.

Through it all, he maintained his innocence.
But on Thursday, Mr. Sobell, 91, dramatically reversed himself, shedding new light on a case that still fans smoldering political passions. In an interview, he admitted for the first time that he had been a Soviet spy.
And he implicated his fellow defendant Julius Rosenberg, in a conspiracy that delivered to the Soviets classified military and industrial information and what the American government described as the secret to the atomic bomb.
In the interview with The New York Times, Mr. Sobell, who lives in the Riverdale neighborhood of the Bronx, was asked whether, as an electrical engineer, he turned over military secrets to the Soviets during World War II when they were considered allies of the United States and were bearing the brunt of Nazi brutality. Was he, in fact, a spy?
“Yeah, yeah, yeah, call it that,” he replied. “I never thought of it as that in those terms.”
Mr. Sobell also concurred in what has become a consensus among historians: that Ethel Rosenberg, who was executed with her husband, was aware of Julius’s espionage, but did not actively participate. “She knew what he was doing,” he said, “but what was she guilty of? Of being Julius’s wife.”