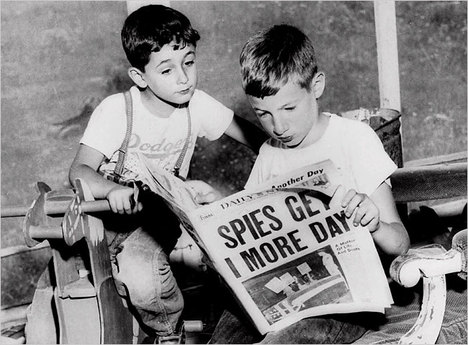 “Ethel and Julius Rosenberg’s sons, Robert, 6, left, and Michael, 10, looking at a 1953 newspaper. They still believe their parents did not deserve to die.” Source of caption and photo: online version of the NYT article quoted and cited below.

(p. A22) They were the most famous orphans of the cold war, only 6 and 10 years old in 1953 when their parents were executed at Sing Sing for delivering atomic-bomb secrets to the Soviet Union. Then they were whisked from an unwanted limelight to urban anonymity and eventually to suburban obscurity.

Adopting their foster parents’ surname, they staked their own claim to radical campus politics in the 1960s. Then in 1973, they emerged to reclaim their identities as the sons of Julius and Ethel Rosenberg, determined to vindicate their parents.
Now, confronted with the surprising confession last week of Morton Sobell, Julius Rosenberg’s City College classmate and co-defendant, the brothers have admitted to a painful conclusion: that their father was a spy.
“I don’t have any reason to doubt Morty,” Michael Meeropol said after several conversations with Mr. Sobell over the weekend.
Their conclusions, in separate interviews, amount to a milestone in America’s culture wars and the culmination of the brothers’ own emotional and intellectual odyssey.
It began in July 1950, when F.B.I. agents arrested Julius Rosenberg in the family’s Lower East Side apartment, thrusting the boys onto a global stage as bit players in their parents’ appeals, in the government’s efforts to extract their parents’ cooperation, and in Soviet propaganda campaigns to cast the Rosenbergs as martyrs.
Their journey became public again nearly a generation later when the brothers proclaimed that their parents were framed to feed cold war hysteria and compensate for America’s counterespionage lapses. Amid the Watergate-era revelations of criminal conspiracies and cover-ups, they began a legal battle to release all the government records in the case.
While they were vested in a single outcome, they insisted all along that they would follow the facts, wherever they led.
“We believed they were innocent and we tried to prove them innocent,” Michael Meeropol said on Sunday. “But I remember saying to myself in late 1975, maybe a little later, that whatever happens, it doesn’t change me. We really meant it, that the truth is more important than our political position.” 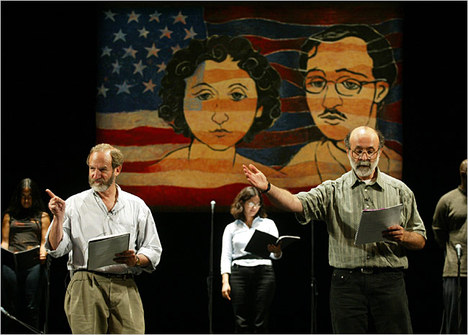 “Michael, left, and Robert Meeropol rehearsing in 2003 for a commemoration of the execution in 1953 of their parents, Julius and Ethel Rosenberg, for passing atomic secrets to the Soviet Union.” Source of caption and photo: online version of the NYT article quoted and cited above.