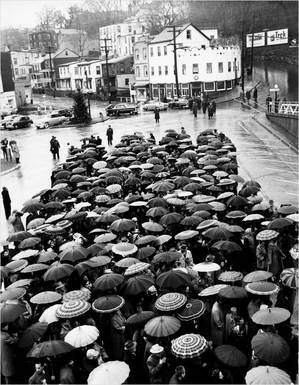 “DOOMED. In 1952, sympathizers gathered near the prison where the convicted spies awaited execution.” Source of caption and photo: online version of the NYT article quoted and cited below.

(p. 6) You could choose to ignore, or somehow explain away, the Hitler-Stalin pact, or be wedded to the original Port Huron Statement instead of the “compromised second draft,” but if you seriously considered yourself fiercely loyal to the far left, you believed that the Rosenbergs were not guilty of espionage. At least you said you did.

For more than 50 years, defending Julius and Ethel Rosenberg was an article of faith for most committed American leftists. That the couple was framed — by officials intent on stoking anti-Soviet fervor and embarrassed by counterespionage lapses that allowed Russian moles to infiltrate the government — was at the core of a worldview of Communism, the Korean War and the ensuing cold war, and an enduring cultural divide stoked by McCarthyism.
Now, that unshakeable faith has been rattled seismically. Not for the first time, of course; in the 1990s, secret Soviet cables released by Washington affirmed the spy ring’s existence. But this time, the bedrock under that worldview seemed to transmogrify into clay.
The rattler was Morton Sobell, 91, the case’s only living defendant. He admitted in an interview that he and Julius Rosenberg had indeed spied for the Soviet Union. His admission prompted the Rosenbergs’ sons, Michael and Robert Meeropol — self-described magnets for global anguish over their parents’ execution in 1953 — to publicly accept, for the first time, that their father committed espionage. Ronald Radosh, co-author of “The Rosenberg File,” a comprehensive account of the trial, declared that “a pillar of the left-wing culture of grievance has been finally shattered.”
“The Rosenbergs were Soviet spies,” he said in an op-ed article in The Los Angeles Times, and “it is time the ranks of the left acknowledge that the United States had (and has) real enemies and that finding and prosecuting them is not evidence of repression.”

For the full commentary, see:
SAM ROBERTS. “Ideas & Trends; A Spy Confesses, and Still Some Weep for the Rosenbergs.” The New York Times, Week in Review Section (Sun., September 21, 2008): 6.