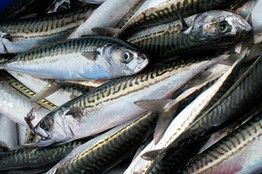 Mackerel on left; Larry Levine on right. Source of photo and image: online version of the WSJ article quoted and cited below.

In discussing the nature of money, my Wabash College economics professor, Ben Rogge, used to say “if a dog eats it, it’s dog food.” (The moral being that, if people use it as money, it’s money.)
There are many examples of unusual money: large stones, cigarettes, and now mackerel (see the article quoted below).
P.S. In an earlier entry, I worried that Rupert Murdoch would kill the WSJ‘s quirky trademark front-page article. Score one for Rupert’s ability to change his mind for the better, when it matters.

(p. A1) When Larry Levine helped prepare divorce papers for a client a few years ago, he got paid in mackerel. Once the case ended, he says, “I had a stack of macks.”

Mr. Levine and his client were prisoners in California’s Lompoc Federal Correctional Complex. Like other federal inmates around the country, they found a can of mackerel — the “mack” in prison lingo — was the standard currency.
“It’s the coin of the realm,” says Mark Bailey, who paid Mr. Levine in fish. Mr. Bailey was serving a two-year tax-fraud sentence in connection with a chain of strip clubs he owned. Mr. Levine was serving a nine-year term for drug dealing. Mr. Levine says he used his macks to get his beard trimmed, his clothes pressed and his shoes shined by other prisoners. “A haircut is two macks,” he says, as an expected tip for inmates who work in the prison barber shop.
There’s been a mackerel economy in federal prisons since about 2004, former inmates and some prison consultants say. That’s when federal prisons prohibited smoking and, by default, the cigarette pack, which was the earlier gold standard.
Prisoners need a proxy for the dollar because they’re not allowed to possess cash. Money they get from prison jobs (which pay a maximum of 40 cents an hour, according to the Federal Bureau of Prisons) or family members goes into commissary accounts that let them buy things such as food and toiletries. After (p. A16) the smokes disappeared, inmates turned to other items on the commissary menu to use as currency.
. . .
Mr. Muntz says he sold more than $1 million of mackerel for federal prison commissaries last year. It accounted for about half his commissary sales, he says, outstripping the canned tuna, crab, chicken and oysters he offers.
Unlike those more expensive delicacies, former prisoners say, the mack is a good stand-in for the greenback because each can (or pouch) costs about $1 and few — other than weight-lifters craving protein — want to eat it.
So inmates stash macks in lockers provided by the prison and use them to buy goods, including illicit ones such as stolen food and home-brewed “prison hooch,” as well as services, such as shoeshines and cell cleaning.
The Bureau of Prisons views any bartering among prisoners as fishy. “We are aware that inmates attempt to trade amongst themselves items that are purchased from the commissary,” says bureau spokeswoman Felicia Ponce in an email. She says guards respond by limiting the amount of goods prisoners can stockpile. Those who are caught bartering can end up in the “Special Housing Unit” — an isolation area also known as the “hole” — and could lose credit they get for good behavior.

One thought on “Mackerel Money: “If a Dog Eats It, It’s Dog Food””