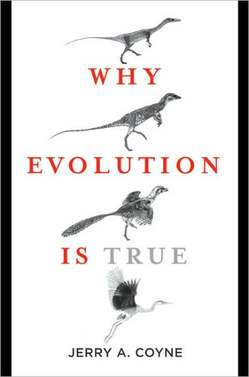 (p. A13) . . ., on Feb. 12, biologists the world over will celebrate Charles Darwin’s 200th birthday. Throughout the year, at festivals galore marking his bicentennial, “On the Origin of Species,” a mere 150 years old, will be hailed as one of the greatest works in the history of the sciences.
. . .
Mr. Coyne begins with a succinct account of what is at stake. “Life on earth evolved gradually beginning with one primitive species — perhaps a self-replicating molecule — that lived more than 3.5 billion years ago; it then branched out over time, throwing off many and diverse species; and the mechanism for most (but not all) of evolutionary change is natural selection.”
Darwinism is thus a claim with several basic components, and the book is structured by carefully exhibiting the evidence for each. Making that structure explicit allows readers to recognize just where they are in the argument. As they follow Mr. Coyne’s parade of evidence — his discussions of the fossil record, of vestigial traits, of the ways in which living things constantly make novel use of the bits and pieces they have inherited, of the distribution of plants and animals — the components of Darwin’s thesis are sequentially supported. We have a list of things to be shown, they are shown and the truth of evolution is established.
. . .
Yet will any defense of Darwin, however painstaking and lucid, succeed in substantially modifying the public-opinion survey results? Mr. Coyne has seen the opposition first-hand, recounting his experience of talking to a group of businessmen about evolution and eliciting the reaction: “Very convincing — but I don’t believe it.” This sort of skepticism is often rooted in a sense that Darwinism somehow discredits morality — a perception that Mr. Coyne argues against, cogently, in a brief final chapter. But he does not seem to appreciate the depth of popular hostility toward Darwin.
. . .
Whether or not he succeeds in bringing Americans en masse to learn to love evolution, he has offered Darwin a splendid birthday present.

The reviewed book is:
Coyne, Jerry A. Why Evolution Is True. New York: Viking, 2009.

A classic paper on whether the speed of a scientist’s acceptance of evolution was related to the scientist’s age, is:
David L. Hull, Peter D. Tessner and Arthur M. Diamond. “Planck’s Principle: Do Younger Scientists Accept New Scientific Ideas with Greater Alacrity than Older Scientists?” Science 202 (November 17, 1978): 717-723.