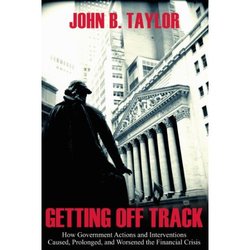 Stanford economics professor John Taylor’s book Getting Off Track: How Government Actions and Interventions Caused, Prolonged and Worsened the Financial Crisis is scheduled to be published in late February 2009.

(p. A19) Many are calling for a 9/11-type commission to investigate the financial crisis. Any such investigation should not rule out government itself as a major culprit. My research shows that government actions and interventions — not any inherent failure or instability of the private economy — caused, prolonged and dramatically worsened the crisis.

The classic explanation of financial crises is that they are caused by excesses — frequently monetary excesses — which lead to a boom and an inevitable bust. This crisis was no different: A housing boom followed by a bust led to defaults, the implosion of mortgages and mortgage-related securities at financial institutions, and resulting financial turmoil.
Monetary excesses were the main cause of the boom. The Fed held its target interest rate, especially in 2003-2005, well below known monetary guidelines that say what good policy should be based on historical experience. Keeping interest rates on the track that worked well in the past two decades, rather than keeping rates so low, would have prevented the boom and the bust. Researchers at the Organization for Economic Cooperation and Development have provided corroborating evidence from other countries: The greater the degree of monetary excess in a country, the larger was the housing boom.
. . .
The realization by the public that the government’s intervention plan had not been fully thought through, and the official story that the economy was tanking, likely led to the panic seen in the next few weeks. And this was likely amplified by the ad hoc decisions to support some financial institutions and not others and unclear, seemingly fear-based explanations of programs to address the crisis. What was the rationale for intervening with Bear Stearns, then not with Lehman, and then again with AIG? What would guide the operations of the TARP?
It did not have to be this way. To prevent misguided actions in the future, it is urgent that we return to sound principles of monetary policy, basing government interventions on clearly stated diagnoses and predictable frameworks for government actions.
Massive responses with little explanation will probably make things worse. That is the lesson from this crisis so far.