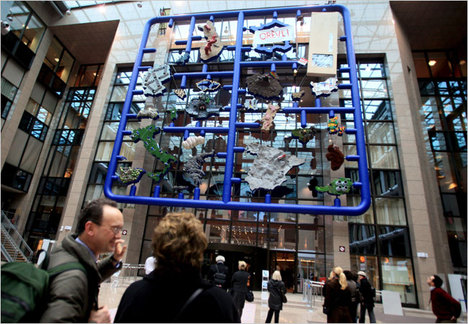 “David Cerny’s artwork “Entropa” is a symbolic map of Europe depicting stereotypes attributed to the individual member countries.” Source of the caption and photo: online version of the WSJ article quoted and cited below.

(p. A6) . . . , an enormous mosaic installed in the European Council building over the weekend, was meant to symbolize the glory of a unified Europe by reflecting something special about each country in the European Union.

But wait. Here is Bulgaria, represented as a series of crude, hole-in-the-floor toilets. Here is the Netherlands, subsumed by floods, with only a few minarets peeping out from the water. Luxembourg is depicted as a tiny lump of gold marked by a “for sale” sign, while five Lithuanian soldiers are apparently urinating on Russia.
France? On strike.
The 172-square-foot, eight-ton installation, titled “Entropa,” consists of a sort of puzzle formed by the geographical shapes of European countries. It was proudly commissioned by the Czech Republic to mark the start of its six-month presidency of the European Union. But the Czechs made the mistake of hiring the artist David Cerny to put together the project.
Mr. Cerny is notorious for thumbing his nose at the establishment. . . .
. . .
Before the hoax was discovered, the Czech deputy prime minister, Alexandr Vondra, said “Entropa” — whose name alone should perhaps have been a sign that all was not as it seemed — epitomized the motto for the Czech presidency in Europe, “A Europe Without Borders.”
“Sculpture, and art more generally, can speak where words fail,” he said in a statement on Monday. “I am confident in Europe’s open mind and capacity to appreciate such a project.”
But he does not feel that way now.