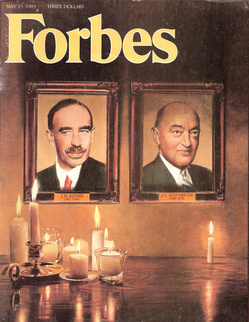 In the May 23, 1983 issue of Forbes there appeared a now-famous essay by the late and great management guru Peter Drucker in which he pointed out that 1983 was the centennial of the birth of both John Maynard Keynes and Joseph A. Schumpeter. He noted that in the decades since the great economists’ passing, the academic and policy worlds worshiped at the feet of Keynes, and all but ignored Schumpeter (hence the many candles in front of the Keynes portrait on the cover, and the single, small candle in front of the Schumpeter portrait).

But Drucker argued that the world had gotten it wrong. Schumpeter was more important because he had understood a crucial truth: the process of creative destruction is indeed the essential fact about capitalism.

The reference to the reprint of the Drucker essay is:
Drucker, Peter F. “Modern Prophets: Schumpeter or Keynes?” In The Frontiers of Management New York: Penguin Putnam, Inc., 1999, 104-15.

A typo-laden version of the essay has been posted on the web at:
http://www.peterdrucker.at/en/texts/proph_01.html

(Note: I thank Aaron Brown for alerting me to the neat cover that appears at the top of this entry).