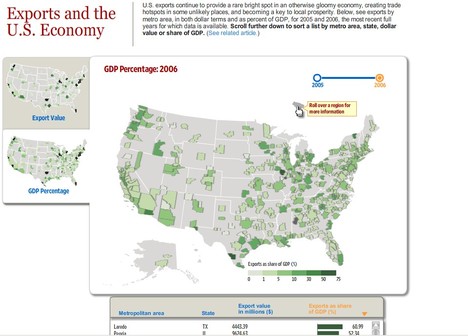 Source of the graphic: screen capture from the online version of the WSJ article quoted and cited below.

(p. A1) Much of the world may be struggling with the economic downturn, but life has been getting better in Columbus, Ind., Kingsport, Tenn., and Waterloo, Iowa.

These out-of-the-way places have become trade hot spots as U.S. exports, fueled by the dollar’s fall, continue to provide a rare spark in an otherwise gloomy economy.
While many economists expect a recent snapback in the value of the dollar and a spreading global slowdown to soften that growth, exports have become a key to greater local prosperity more than at any time in decades.
. . .
(p. A16) Export-driven growth marks a dramatic shift in an economy that has relied heavily on consumer spending. That has slowed in recent months as Americans, nervous about job losses, teetering banks, falling home values, and rising gasoline and food prices, have tightened spending. Against that background, exports have emerged as a powerful motor.
Over the past year, real-goods exports have risen $115 billion, or 12%, and are up across every major category. They now make up nearly 13.5% of gross domestic product, the highest percentage since World War II. Critics often grumble that the U.S. exports masses of scrap steel and other waste materials to recyclers in China and elsewhere, which is true, but exports of manufactured goods, commodities and services are also growing. Consumer products, from sporting goods to art supplies, have risen 12%, and even autos, which are languishing on showroom floors in the U.S., saw a 4% bump up in exports.
Service exports — which include media, entertainment, financial services, computer software and foreign tourism in the U.S. — have grown strongly right along with the larger goods side of the trade ledger. Through the second quarter of 2008, real-service exports are up nearly 10% over the past year.
It’s a badly needed tonic for the beleaguered U.S. economy.

For the full story, see:
TIMOTHY AEPPEL. “Exports Bolster Local Economies.” The Wall Street Journal (Thurs., SEPTEMBER 11, 2008): A1 & A16.
(Note: the title of the article on the web is: “Exports Prop Up Local Economies.”)
(Note: ellipsis added.)