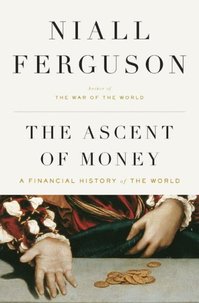 Niall Ferguson has a recent book on money that has received a great deal of attention (but that I have not yet seen). Here are some of his views, as expressed at the 2009 World Economic Forum, in Davos, Switzerland:

(p. B4) “Even before Obama walked through the White House door, there were plans for $1 trillion of new debt,” said Niall Ferguson, a Harvard historian who has studied borrowing and its impact on national power. He now estimates that some $2.2 trillion in new government debt will be issued this year, assuming the stimulus plan is approved.

“You either crowd out other borrowers or you print money,” Mr. Ferguson added. “There is no way you can have $2.2 trillion in borrowing without influencing interest rates or inflation in the long-term.”
Mr. Ferguson was particularly struck by the new borrowing because the roots of the current crisis lay in an excess of American debt at all levels, from homeowners to Wall Street banks.
“This is a crisis of excessive debt, which reached 355 percent of American gross domestic product,” he said. “It cannot be solved with more debt.”
While Mr. Ferguson is a skeptic of the Keynesian thinking behind President Obama’s plan — rather than borrowing and spending to stimulate the economy, he favors corporate tax cuts — even supporters of the plan like Mr. Zedillo and Stephen Roach of Morgan Stanley have called on the White House to quickly address how it will pay for the spending in the long-term.

The latest Ferguson book, is:
Ferguson, Niall. The Ascent of Money: A Financial History of the World. New York: Penguin Press, 2008.